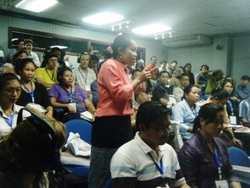 VIENTIANE, Laos— “The grabbing hands grab all they can/All for themselves – after all/It’s a competitive world.”

New wave band Depeche Mode released their single “Everything Counts” in the early 1980s and the message of the song seemed prophetic of what’s happening today as the global financial crisis and the ill effects of climate change are spawning a “new wave of land-, water-, and resource-grabbing” in Asia and Europe, an international civil society said Tuesday.

In its declaration, the Asia-Europe People’s Forum (AEPF) thus urged the 51 state leaders of the Asia-Europe Meeting (Asem) Summit to protect the tenure rights of small-scale food producers and to ensure a more equitable governance of natural resources.

Governments “should protect and respect people’s access to land, water, and biodiversity,” according to the Ninth AEPF Declaration the Laos government delivered to Asem state leaders.

AEPF, a grouping of civil society organizations that engages Asem, said states must abide by the goals of food sovereignty and sustainable land and natural resource management.

“Powerful international and domestic forces are pushing forward a new round of enclosures globally for both food and non-food purposes,” according to the AEPF Declaration.

“In Asia, land- and resource-grabbing is accelerating in the name of ‘development’…through large-scale investments in agriculture and extractive industries…resulting in a cascade of negative impacts on rural livelihoods and ecologies, human rights, and local food security and food sovereignty,” it said.

Several European Union-wide policies are fueling this global resource-grabbing. Among them are:

• The Common Agricultural Policy (CAP), which promotes competitiveness of European agri-business, is forcing many farmers to leave agriculture.

• The EU’s trade policy, in particular the Everything But Arms initiative, has fuelled global land grabbing.

At the same time, banks, hedge funds, and pension funds are causing man-made starvation and hunger by unnecessarily driving up food prices when they bet on food prices in financial markets, the AEPF Declaration said. Food staples, such as wheat, corn, rice, and soya, are becoming prohibitively expensive as speculation results in drastic price swings in food.

The AEPF called on government regulation of food speculation by banks and financial market traders.

“Ensure that all futures contracts are cleared through regulated exchanges. Contracts need to be brought out into the open, in the same way that shares are traded on the stock exchange. There should also be strict limits on the amount that bankers can bet on food prices.”

Aside from food, water has become scarce as international financial institutions like the World Bank and the Asian Development Bank manipulate its distribution in many countries, the AEPF said.

These institutions promote anti-poor policies, increasing the role for corporations in the water sector and producing bigger pubic debts, said the AEPF, which also called for equitable access to water.

“Food sovereignty is based on the right of peoples to define their own food, agriculture, livestock and fishery systems, independent of international market forces,” said the AEPF in support of farmers, peasants, pastoralists, fisher folk, indigenous peoples, women, rural youth, and their allies all over the world.

“Our health and the health of the earth and future generations depend on healthy soil, strong food communities and small-scale diversified farms,” the AEPF said.

The international group of activists also called on government to respect the rights of indigenous peoples to their lands, territories, and resources. It said these form the material, economic, social and cultural bases for their collective survival and development.

Indigenous peoples must thus be included in decision-making processes relating to development. They must have free, prior, and informed consent in development projects, while acknowledging their contribution in sustainable development through their low-carbon lifestyles, their traditional knowledge, indigenous techniques and innovative ways of production.

The Declaration was submitted in behalf of the AEPF by the Lao government, which coordinated both the AEPF and the Asem.

The AEPF is traditionally held simultaneously with the Asem, but the lack of infrastructure to accommodate many participants to both fora in Laos has forced the holding of the AEPF a couple of weeks earlier than the ASEM. While both fora are non-binding, strategic high-level policies are traditionally initiated here.

More than 1,200 people—representatives of major people’s movements, prominent scholars, progressive policy-makers across Asia and Europe—from about countries in Asia and 15 countries in Europe, and around 400 Laotians from mass and non-government organizations attended the AEPF9.