Commercial farming in the Congo not for the faint-hearted 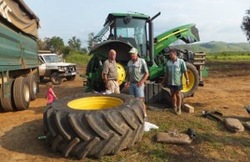 Elephant grass can grow up to four metres tall. Clearing large swaths of farming land from this grass was just one of the challenges a group of South African farmers had to deal with when they first arrived in the Republic of the Congo, also known as Congo-Brazzaville. Luckily during the dry season of 2011 there was a run-away fire that took care of the elephant grass.

The Congo Agriculture team repairing a punctured tractor tyre.
Other challenges these farmers face on a daily basis are getting their equipment through the ports, a process that can literally take months, and securing financing for their projects in the central African country.

Early last year How we made it in Africa reported that the Congolese government extended a formal invitation to South African farmers to investigate the possibility of commercial farming in the Congo.

An organisation called Congo Agriculture, affiliated to South African farmers union Agri SA, had been established to facilitate and drive the process of setting up the farmers in the Congo.

According to Fred Daly, secretary of Congo Agriculture, numerous African countries have approached Agri SA to help develop their agricultural sectors. Agri SA’s criteria are “firstly that the country has a stable government, and secondly that the local population would not be displaced on land that we were going to use for farming. The Republic of the Congo came up tops and that is why we went there,” says Daly.

When the project was originally announced in 2009, over 2,000 South African farmers showed an interest. However, at the end only 30 farmers were up for the challenge and were allocated land.

Daly notes that all these farmers have different backgrounds; some are seeking new opportunities in the Congo due to a lack of land and growth potential in South Africa, while others farmed in the Congo in the 1980s but had to leave because of political tensions.

In November 2011, Congo Agriculture sent a party of 10 members from South Africa to the 80,000 hectares farm to get the first seeds in the ground before the rainy season in March. The farmers are mainly concentrating on the cultivation of maize, but are also experimenting with soya beans.

The farmers travelled by road up the west coast of Africa to the Congo. The convoy, comprising four trucks and seven vans with trailers, made the trip through Namibia, Angola, the DRC and Cabinda, arriving in the Congo on 16 December 2011. At the border there was a lavish welcoming ceremony attended by government officials and local media. The welcoming festivities lasted most of the afternoon, and then the whole entourage set off to the farm, situated 50 km north of the town of Dolisie.

Significant potential, but not for the faint-hearted

Although the Congo’s agricultural sector is underdeveloped, Daly says it has immense potential. “They need every foodstuff you can imagine, except sugar, which they already got. They are paying huge prices for imported food. The market is there, and it is a huge opportunity. And of course you’ve got two rainy seasons, so if you are planting grains, you’ve got double the potential you’ve got in South Africa.”

Despite the project being backed by both the governments of the Congo and South Africa, the farmers are by no means living a life of luxury. Daly describes it as a “pioneering project”.

When the South African farmers first arrived in the Congo they had to build a camp around some old buildings, with most of them living in tents or caravans. There was no running water, so they had to install a borehole.

Daly says the project started off slower than initially planned, largely due to some financial commitments not being honoured. Although 30 farmers were allocated land, less than 20 are currently actively farming. Daly describes it as a “kibbutz system”, where everyone is working on 1,200 hectares of land. The farmers are, however, slowly but surely preparing to go out to their own farms.
While financing remains a challenge, Daly is confident that within the next two to three years the venture will prove to be “a very worthwhile project”.

He adds: “The Congolese government is very happy with the progress, they have never seen farming on the scale that we are doing.”