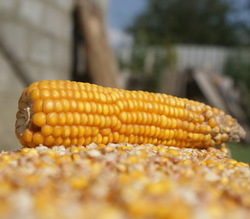 Japan wants to grow corn on Ukraine's black earth (chernozem) and import it while Ukraine suggests that Japan, as a "hi-tech country", invest in Ukrainian farmland.

Japan views Ukraine as an attractive partner for providing the country with food. The State Committee for Land Resources of Ukraine has reported that such an opinion was expressed by experts of the Japanese agricultural corporation Agriculture and Livestock Industries Corporation of Japan at a meeting with the head of the committee, Serhiy Tymchenko.

The official said that the Japanese, in addition to wishing to import corn, wanted to grow it on Ukraine's black earth.

"The Japanese businessmen are interested in the wide capabilities of our country in the area of grain production, including the production of corn on Ukraine's fertile soils," the press service of the committee said.

It recalled that Japanese entrepreneurs were cooperating with Ukrainian farmers as regards corn imports: since the beginning of 2012, they have already bought 800,000 tonnes of corn in Ukraine. Japan annually imports 16 million tonnes of corn.

Tymchenko, for his part, said that his committee wanted to develop cooperation and suggested that Japan, as a "hi-tech country", invest in Ukrainian farmland.