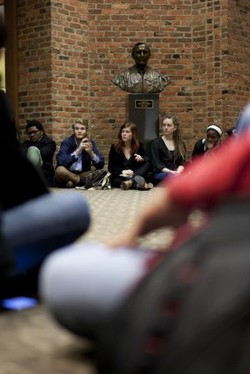 A 'teach-in' led by Vanderbilt students on February 8, 2012 regarding Vanderbilt's involvement in land grab activities.

Over the past year, a series of investigations undertaken by both Vanderbilt students and organizations such as the Oakland Institute revealed Vanderbilt’s investment in a hedge fund responsible for land grabs in Mozambique and in a hotel company, HEI, that has been found to be in violation of labor laws. In the wake of these startling discoveries, it is necessary for the university’s endowment to finally have some form of accountability. Efforts escalated to bring attention to these grievances, and when rallies, petitions, a Kirkland Hall teach-in and a visit from the Oakland Institute failed to elicit any response from the administration, hundreds of Vanderbilt students set up an around-the-clock encampment in front of Kirkland Hall. The vigil lasted 45 days, during which the university administration failed to put any real effort into reforming our investment policy.

On May 17, 2012, Occupy Vanderbilt sent a letter to Vice Chancellor of Investments Matthew Wright encouraging him and the Office of Investments to draft ethical investment principles. It was subsequently published in the Nashville Scene and The Tennessean. As of now, the vice chancellor has yet to respond to our letter, much less acknowledge it. Even a scathing retort from the vice chancellor would be welcomed more than such flippant disregard. At least in the former case he would be continuing discourse with students — thus recognizing their humanity — and, more importantly, the humanity of the suppressed individuals for whom they advocate. Instead, Mr. Wright has altogether disregarded the students, HEI employees and displaced Mozambican farmers as subjects not to be reasoned with. Even if the administration remains stalwart in its opinion that no investment is too morally amiss for a community creed that holds “accountability” as one of its tenets, it is unfortunate that the pillar of “civility” rest on equally tenuous grounds.

I invite Vice Chancellor Wright to respond directly to the request made on May 17 — that his office prepare a statement on ethical investment guidelines that would establish a position on what sorts of businesses are morally questionable enough that Vanderbilt should not finance them.

— Evan Jehl is a junior in the College of Arts and Science and a representative of Vanderbilt Students of Nonviolence. They can be reached at [email protected]