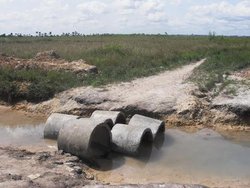 Despite some positive changes, there are still many issues of concern on the operations of Addax Bioenergy SL Limited

The Sierra Leone Network on the Right to Food (SiLNoRF) has published an Annual Monitoring Report on the sugarcane-to-ethanol project of the Swiss firm Addax Bioenergy. Some positive changes are acknowledged by SiLNoRF, e.g. on employment. However, there are still many issues of concern, such as communities asking for a written agreement from Addax to prevent it from using more than the demarcated land. The rice harvests on some community fields were low and therefore not sufficient to ensure food security. The sustainability of the Farmer Development Programme (FDP), which is a mitigation measure of Addax, is still not guaranteed. Moreover, access to water is still a problem in certain communities.

SiLNoRF today published an Annual Monitoring Report on the sugarcane-to-ethanol project of the Swiss firm Addax Bioenergy. Mohamed Conteh, National Coordinator of SiLNoRF, stated that, “even if we still have many issues of concern on Addax, some positive changes are recorded by SiLNoRF during the last 12 months”. Among these are the facts:

The report also highlights the following issues of concern:

The report ends with a list of recommendations to the company, policy makers (the government and local authorities) as well as to the International Development Finance Institutions.

Mohamed Conteh, National Coordinator of SiLNoRF, stated that “it is crucial that we continue to monitor both the positive developments and the issues of concern in the future”.