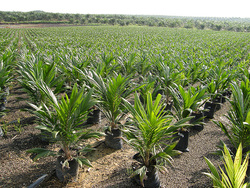 Demand for palm oil is driving the deforestation of forests in Borneo, as trees are cleared to make way for the planting of oil farm plantations, which will send carbon dioxide, a global-warming gas, into the atmosphere.

Expanding production of palm oil, a common ingredient in processed foods, soaps and personal care products, is driving rainforest destruction and massive carbon dioxide emissions, according to a new study led by researchers at Stanford and Yale universities.

The study, published online Oct. 7 in the journal Nature Climate Change, shows that deforestation for the development of oil palm plantations in Indonesian Borneo is becoming a globally significant source of carbon dioxide emissions.

Plantation expansion is projected to contribute more than 558 million metric tons of carbon dioxide to the atmosphere in 2020 – an amount greater than all of Canada's current fossil fuel emissions.

Indonesia is the leading producer of palm and palm kernel oil, which together account for more than 30 percent of the world's vegetable oil use, and which can be used for biodiesel. Most of Indonesia's oil palm plantation expansion is occurring on the island of Borneo, also known as Kalimantan, which occupies a land area nearly the size California and Florida combined. Plantation leases, covering 32 percent of Kalimantan's lowlands outside of protected areas, represent a major land bank that is slated for development over the next decade, according to the study.

In 2010 alone, land-clearing for oil palm plantations in Kalimantan emitted more than 140 million metric tons of carbon dioxide – an amount equivalent to annual emissions from about 28 million vehicles.

Home to the world's third-largest tropical forest area, Indonesia is also one of the world's largest emitters of greenhouse gasses, due to rapid loss of carbon-rich forests and peatlands. Since 1990, development of oil palm plantations has cleared about 16,000 square kilometers of Kalimantan's primary and logged forested lands – an area about the size of Hawaii. This accounts for 60 percent of Kalimantan's total forest cover loss in that time, according to the study's authors.

"Despite contentious debate over the types and uses of lands slated for oil palm plantations, the sector has grown rapidly over the past 20 years," said project leader Lisa M. Curran, a professor of ecological anthropology at Stanford and a senior fellow at the Stanford Woods Institute for the Environment. By combining field measurements with analyses of high-resolution satellite images, the study evaluated lands targeted for plantations and documented their carbon emissions when converted to oil palm.

"A major breakthrough occurred when we were able to discern not only forests and non-forested lands, but also logged forests, as well as mosaics of rice fields, rubber stands, fruit gardens and mature secondary forests used by smallholder farmers for their livelihoods," said Kimberly Carlson, a Yale doctoral student and lead author of the study. "With this information, we were able to develop robust carbon bookkeeping accounts to quantify carbon emissions from oil palm development."

The research team gathered oil palm land lease records during interviews with local and regional governmental agencies. These records identify locations that have received approval and are allocated to oil palm companies. The total allocated leases spanned about 120,000 square kilometers, an area slightly smaller than Greece. Most leases in the study occupied more than 100 square kilometers, an area slightly larger than Manhattan.

Using these leases in combination with land cover maps, the team estimated future land-clearing and carbon emissions from plantations. Eighty percent of leases remained unplanted in 2010. If all of these leases were developed, more than a third of Kalimantan's lowlands would be planted with oil palm by 2020.

Despite these large numbers, accurate information about leases is not readily available for public review and oversight, even after the leases are granted. The average Kalimantan resident is unaware of plans for local oil palm development, which can have dramatic effects on residents' livelihoods and environment, Curran said.

"These plantation leases are an unprecedented 'grand-scale experiment' replacing forests with exotic palm monocultures," said Curran. "We may see tipping points in forest conversion where critical biophysical functions are disrupted, leaving the region increasingly vulnerable to droughts, fires and floods."

Combined with results generated from their more detailed district-level study recently published in the Proceedings of the National Academy of Sciences, the researchers emphasize that sustainably producing palm oil – a stated goal of the Indonesian palm oil industry – will require re-evaluation of awarded oil palm plantation leases located on forested lands.

Rob Jordan is the communications writer for the Stanford Woods Institute for the Environment.