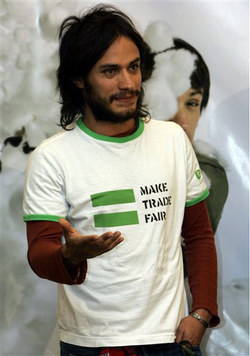 “It's crucial that this issue is tackled. Land investment should benefit local communities, not leave people homeless and hungry.”
Angelique Kidjo
Global Ambassador for Oxfam

International writers and artists including Paul Theroux, Kamila Shamsie, Henning Mankell and Aminatta Forna, singers Angelique Kidjo and Baaba Maal, The Thick of It star Peter Capaldi, Mexican actor Gael Garcia Bernal and 'Sex and the City' actress Kristin Davis, have joined Oxfam’s campaign to stop ‘land grabs’ in developing countries. They are calling on the World Bank to lead the way by temporarily freezing its land deals to allow time for tighter controls to be put into place to ensure poor people don't lose out.

The past decade has witnessed an unprecedented scramble by foreign investors to buy land in developing countries – with an area the size of London changing hands every six days. However, weak regulation has failed to protect the rights and needs of the people living on the land who are often evicted, sometimes violently, without consultation or compensation. As a result, ‘land grabs’ are leaving vulnerable people homeless and destitute, without land to grow food to eat and make a living.

Angelique Kidjo, Global Ambassador for Oxfam, said: "It's crucial that this issue is tackled. Land investment should benefit local communities, not leave people homeless and hungry."

Land sold off in the last decade could feed 1 billion

An area eight times the size of the UK was sold off globally in the last decade. This land could feed a billion people, equivalent to the number of people who go to bed hungry every night. In an open letter to the World Bank, writers and artists from across the globe say:

“We know about the gold rush and the oil rush. Now we have a modern land rush: a hidden scandal of the 21st century that we must stop. In Africa, an area the size of Kenya has been acquired for agriculture by foreign investors in a decade. In Liberia, 30 per cent of the country has been swallowed up by land deals in just five years. With food prices rising sharply again, a new wave of land grabs could be unleashed as investors seek to make a profit. Protections are needed. Fast.”

Rising food prices, increased demand for land to grow food, and the push to meet damaging bio-fuels targets which divert crops from food into fuel are some of the factors driving the rush for land.

Oxfam is calling on the World Bank to help prevent land grabs by temporarily freezing its large scale land investments. The World Bank has a remit to tackle global poverty and is in a unique position to lead the way in stopping land grabs, as both an investor in land and an adviser to developing countries. Putting a stop to its investments in the short term will give the World Bank time to put its own house in order, set standards for investors and introduce more robust policies to help stop land grabs.

People wishing to support the campaign can sign up to Oxfam’s petition at www.oxfam.org/landgrabs

The full list of signatories to the open letter to the World Bank: