Mendillo returns to farms as Harvard vies for Ivy rebound 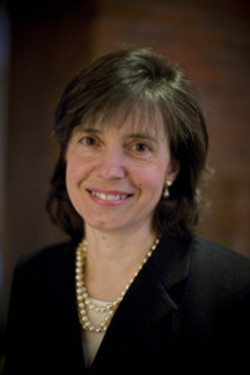 As Jane Mendillo seeks to return the world’s richest school to the top of the performance charts, she’s revisiting a strategy she pioneered more than a decade ago: buying timberland. Photographer: Justin Ide/Harvard University News Office via Bloomberg
Bloomberg | Sep 18, 2012

Mendillo returns to farms as Harvard vies for Ivy rebound

Jane Mendillo, who took over as head of Harvard University’s $32 billion endowment four years ago, is still searching for an edge.

While Harvard has recouped about half of the $10 billion it lost after global financial markets collapsed in 2008, Stanford, Columbia and Princeton universities have been posting bigger gains. Colleges are preparing to report modest returns for the year ended June 30 after the Standard & Poor’s 500 Index posted only a 3.1 percent gain.

“People are competing for outsized returns and there are fewer and fewer of them available,” said Brad Barber, a finance professor at the University of California, Davis. “The best and brightest might be able to find something.”

Endowments and foundations had the worst returns of any class of institutional investor, gaining just 0.37 percent for the year through June, Wilshire Associates said in an Aug. 6 report. Harvard will post results in the coming weeks. Princeton President Shirley Tilghman said last week her school’s endowment probably earned zero to 5 percent on its investments in the period, down from 22 percent a year earlier.

As Mendillo seeks to return the world’s richest school to the top of the performance charts, she’s revisiting a strategy she pioneered more than a decade ago: buying timberland. That proved profitable for Cambridge, Massachusetts-based Harvard after it bought and sold forests in the U.S. Now Mendillo is expanding the approach globally while capping private-equity funds and other alternative assets in the U.S.

In April, Mendillo flew to Brazil where she boarded a turboprop plane in Brasilia, the inland capital, and headed deep into the countryside to inspect tree plantations the university has bought. Since she took over the endowment in July 2008, Harvard’s holdings of forests, farms and other natural resources in Brazil as well as in New Zealand and Romania have grown to about 10 percent of the portfolio -- more than $3 billion -- and she wants to add more.

“What I want is properties that produce something that the world is going to want more of, and the increase in the supply is difficult,” Mendillo, 53, said in an interview earlier this year in the Federal Reserve Bank building in Boston where Harvard Management Co. has its offices. “Timberland is the perfect example.”

The push into farms and forests follows a boom in commodity prices led by the growth of China and other emerging economies. Yale University disclosed for the first time last year it had 8.7 percent of its $19.4 billion endowment invested in natural resources. A study by the National Association of College and University Business Officers showed the average allocation by colleges in fiscal 2011 was 5 percent, up from 2.2 percent in 2008.

Harvard stands out among universities because, in addition to the size of the deals it does, it’s one of the first to directly buy such properties outside of the U.S. -- as opposed to investing in shares through other funds -- and actively manage them, said Jack Lutz, an economist at Forest Research Group in Rowley, Massachusetts.

“Harvard goes into places no one else goes into,” said Lutz, who previously worked for the Hancock Timber Resource Group, the world’s largest timberland manager for institutional investors. “They’re willing to accept more risk than most.”

It was Harvard’s early and enthusiastic embrace of alternative assets such as private equity and hedge funds that turned it into one of the top performers among endowments, with a 20-year return of 12.9 percent through 2011. Yale is the 20- year leader with 14.2 percent. Since the credit crisis, when the Harvard lost 27 percent on its investments in 2009, Mendillo has been cutting leverage and trying to sell stakes in private equity funds that no longer produce top returns.

As financial markets have recovered, Harvard generated investment returns of 11 percent in 2010 and 21.4 percent last year. New York-based Columbia had the strongest recovery in those two years, with returns of 17 percent and 24 percent, followed by Princeton in New Jersey, and Stanford, near Palo Alto, California. Over 10 years, Harvard ranks fourth among the Ivy League’s eight schools with an average gain of 9.4 percent.

Harvard’s stake in natural resources has stood out over this period, gaining 19 percent in 2011, and 13 percent over the past 10 years. In contrast, investments in private-equity managers such as Boston’s Bain Capital Partners LLC that once fueled the university’s gains, producing an annual average return of 24 percent over the past 20 years, returned 7 percent in the past decade.

“The question is whether they are better than average investors,” Steven Kaplan, a finance professor at the University of Chicago’s Booth School of Business, said in an interview. “To do that effectively you have to have some advantage, whether it’s better information or better access. That’s a bet she’s making.”

The university has regained its financial footing since the crisis when investment losses and a cash crunch forced it to postpone a 50-year expansion plan begun in 2007 that included 10 million square-feet of new space in Boston across the Charles River from the main campus. President Drew Faust, who declined to comment for this story, said in June that construction of the $1 billion centerpiece science center would resume.

After being forced to cut about 50 positions in the wake of the 2009 crisis, Mendillo is also expanding her staff of about 200 as she seeks to recreate the juggernaut fashioned by her mentor, Jack Meyer, during his 15 years at the helm. She rose through the ranks under Meyer, starting out as an insurance and steel industry analyst at the endowment in 1987 before leaving in 2002 to run the endowment at Wellesley College, 14 miles from Harvard.

A mother of two, Mendillo graduated from Yale University with a degree in English literature in 1980, joining the investment office there before Yale hired its longtime manager David Swensen. She got an MBA from Yale and moved to Boston to work at Bain & Co. in 1984, around the same time the management consultant company spun off the private-equity firm that Republican presidential candidate Mitt Romney once ran.

Her conviction in natural resources dates back to 1997 when as a vice president she recommended the endowment buy timberland in Oregon, Washington and later Pennsylvania. U.S. paper companies had been selling their forests for years as they sought to generate cash amid competition from overseas, finding buyers in pension funds and other institutions.

The endowment had the cash that paper companies needed, said Meyer, who resigned in 2006 to start the hedge fund Convexity Capital Management LP in Boston. It didn’t have to squeeze the assets for income and it had the expertise to do the complicated deals and ultimately manage the holdings, he said. Harvard sold all the U.S. properties at a substantial profit.

“That fell right into Harvard’s strength,” said Meyer, who left amid criticism from Harvard alumni that some endowment employees were paid too much. “It’s a big advantage having this internal team that can pay attention to these details.”

The success galvanized Harvard Management, which added specialists such as Andy Wiltshire, a New Zealand native who worked in the forest service there and joined the endowment in 2001. He came from GMO Renewable Resources, the forestry affiliate of Grantham, Mayo, Van Otterloo & Co., the Boston-based firm co-founded by Jeremy Grantham that manages about $100 billion.

Wiltshire, who was promoted to head of alternative assets including natural resources at Harvard in 2008, was the university’s highest-paid employee in 2010, earning $5.5 million. Mendillo received compensation of $3.52 million.

Harvard also hired Grantham’s son, Oliver Grantham, who is a senior vice president on the natural resources team. His father is a well-known advocate for investing in natural resources on the belief that population and economic growth in countries such as China will push up commodity prices.

In the past decade, Harvard turned its attention overseas. In 2004, it outbid CITIC Group Corp., a Chinese finance and real estate company, for the cutting rights to New Zealand’s Kaingaroa pine plantation forests. The next year, Harvard began buying forests in Romania, and owns almost 100 percent of a company that’s among the largest private holders of timberland there, with 35,000 hectares valued at $100 million.

The endowment’s global reach also extends to South Africa, according to Mendillo, whose husband runs a company that advises on so-called green investing, and was an assistant Massachusetts secretary of environmental affairs. In 2010, the fund paid $28 million for a dairy farm in New Zealand.

“It takes expertise to execute in this area,” said Mendillo, who made a rare public appearance in July in New York at an investor conference and talked about her new strategy. “A lot of other investors don’t have the expertise, don’t have the team to go out and look at individual timberland or other natural resources and decide what they think are the higher- potential or higher-risk situations.”

Mendillo also said that in the next five years or so there may be opportunities to buy natural resources again in the U.S., where it can take at least three times as long to grow trees for harvest as it does in more temperate climates such as Brazil.

While she confirmed some of the investments that have been reported in local news accounts in New Zealand and Romania, the university in general doesn’t comment on its endowment holdings. Because Harvard is a nonprofit institution, it is only required to disclose publicly traded investments, which amounted to less than $1 billion in the second quarter.

Some in the Harvard community are skeptical. Students representing the coalition Responsible Investment at Harvard wrote a letter to the Harvard Crimson in December criticizing the school for making investment decisions “in a black box, removed from the input and examination of Harvard community members.” They also called for a more socially responsible investment fund and divestments from companies such as Alpha Natural Resources, a coal producer.

At the same time environmentalists and development experts have ramped up criticism of the rush of large institutional investors including private-equity funds buying agricultural land to develop export crops, primarily in poor regions of the world. A World Bank report last year found there have been an unprecedented number of large-scale farmland deals in recent years, primarily in Africa, with questionable benefits to the local population.

If greater returns are “going to come at the expense of environmental degradation and social harm, then I don’t think it is worth it,” said Joshua Humphreys, a fellow at the Tellus Institute. The Boston-based nonprofit research firm advocates for sustainable economic development.

In April, a group of activists wrote a letter to Faust condemning Harvard Management’s participation in a global agricultural-investing conference in New York, saying it promoted corporate management of farms, which leads to hunger, rising food prices and environmental degradation such as monoculture forests that destroy native habitats.

While Mendillo won’t discuss details of the university’s investments, she said they’re all done on a sustainable basis.

“We have a very high conviction that if we create value in the portfolio by increasing the health of the forest, increasing the forest itself, allowing it to mature while we hold it, we’re going to be able to sell at a better price,” she said. “It’s economically and environmentally driven.”

To contact the reporters on this story: Michael McDonald in Boston at [email protected]

To contact the editor responsible for this story: Jonathan Kaufman at [email protected]