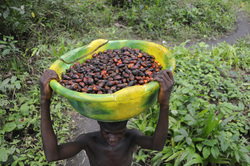 “You have to spend a lot of time talking to the local people,” says Mr Frayne. “It’s gone OK for us. The areas in which we are working are fairly sparsely populated and the soil is good.”