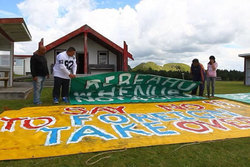 WELLINGTON, Sept. 11 (Xinhua) -- A Chinese company's controversial bid to buy 16 New Zealand dairy farms has stalled again after a mystery backer agreed to finance another legal appeal against the purchase.

Shanghai Pengxin Group looked set to tie up the hard-fought purchase of the Crafar farms last month after New Zealand's Court of Appeal overturned the last remaining legal objection to the sale.

However, an objection to the purchase is now awaiting another hearing in the Supreme Court after an unnamed backer agreed to finance the legal costs of an indigenous Maori trust that wants the opportunity to buy back three of the farms, which it claims were wrongly appropriated by the government in the distant past.

Hardie Peni, executive chairman of Tiroa Te Hape Trust, told Xinhua Tuesday he could not name the trust's benefactor because anonymity was a condition of his support, but he said it was not merchant banker Michael Fay with whom the trust had worked on the previous legal battles.

Peni said the appeal to the Supreme Court would be based on the same argument put to the Court of Appeal: that Shanghai Pengxin, which wants to purchase the farms through Hong Kong-registered subsidiary Milk New Zealand Holdings, lacked the relevant expertise and management experience to run New Zealand dairy farms.

"We're challenging the character and the suitability of the parties who are named as the purchasers. We believe they don't fulfill New Zealand's overseas investment requirements," Peni said in a phone interview.

While the Maori claimants were only interested in three specific farms, the grounds for appeal covered the whole 16 farms up for sale, he said.

"If the decision is upheld then everything is off the table," he said.

The trust's backer had "put a lot of thought into it and we've analyzed the arguments thoroughly," Peni said.

The Court of Appeal decision overturning the argument had been "all over the place," he said.

"I think some clarity needs to be outlined in terms of the arguments. Some of the comments made in the judgment need some clarity around them whether the other party agrees or doesn't agree," he said.

The trust had previously offered to work with Shanghai Pengxin in supplying New Zealand produce and had entered talks on buying the three farms it wanted, but the talks broke down in June over the price.

The sale of the farms has sparked a national debate that has risen to the highest level of government over what constitutes a strategic national asset in a nation whose primary industry is agriculture and under what conditions those assets should be sold to overseas interests.

The government had twice granted Shanghai Pengxin approval to purchase the farms following recommendations from its Overseas Investment Office (OIO), but both decisions were contested in court by the Crafar Farms Independent Purchasers Group (CFIPG), a consortium led by Fay and including Tiroa Te Hape Trust.

In February, the High Court in Wellington upheld the CFIPG argument that the OIO had failed to properly consider the benefits a foreign buyer would bring to the farms, and the court set aside the OIO's recommendation to the government.

After the government approved another recommendation from the OIO, the CFIPG appealed arguing that Shanghai Pengxin lacked the relevant expertise, an argument that the High Court earlier dismissed.

Last month, the Court of Appeal upheld the earlier decision, saying Zhaobai Jiang, who owns 99 percent of the shares in Nantong Yingxin Investment Co. Ltd., Shanghai Pengxin's parent company, was a "successful entrepreneur" with a record of successful property developments and a "fast-growing agribusiness" with interests in China and South America.