Chinese “land grabs” in Africa – the reality behind the news 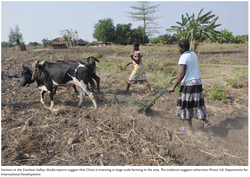 Chinese “land grabs” in Africa – the reality behind the news

China’s engagement in Africa has become a hot topic since it significantly accelerated its rate of investment in African countries in the early 2000s. Recent analyses of Sino-African relations – made in the context of China’s growing global footprint – assume that China is on an exploitative hunt for natural resources to sustain its domestic development needs. The mainstream Western media tends to portray China not so much as a development partner, but rather as a “neo-coloniser” that cooperates with African countries through unequal exchanges. /.../

However, there has been little effort to examine evidence behind such dramatic statements, raising questions about the how reliably these headlines describe reality. This policy brief offers a more factual picture of the situation. It first gives a brief overview of the available evidence of large-scale Chinese investment in agriculture, then discusses the extent to which the purpose of such investment is to export produce back to China.