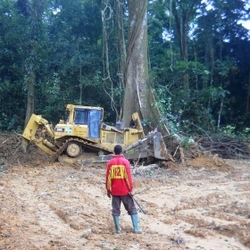 Forests being cleared in Fabe, Cameroon. (Photo: SAVE-Wildlife)
Oakland, USA. — An American owned company with a track record of illegality and links to private equity giant Blackstone Group is threatening to destroy rainforests and dislocate local communities in Cameroon, Africa. The company claims they are “addressing a dire humanitarian need in the Republic of Cameroon," but fresh evidence shows this could not be further from the truth.
A new report from The Oakland Institute, in collaboration with Greenpeace International, exposes how a New York-based agri-corporation, Herakles Farms, and its local subsidiary are involved in a controversial land grab that is deceitfully portrayed as sustainable development. New documentary evidence has shown it has been opposed by locals since 2010 and is one of the largest in Africa and in the midst of a biodiversity hotspot.
WHAT: New report to debunk New York-based corporation’s effort to greenwash destruction of rainforest and livelihoods in Africa
WHERE: International telephone conference
CALL IN DETAILS(2): This will be a telephone conference, which means you can call in from anywhere in the world with the following numbers. When you call, you will be asked to provide the name of the conference call, which is: “Understanding Land Investment Deals in Africa: Deceit in Cameroon”. You will have an opportunity to put your questions forward by the conference moderator.
For US-based callers, call: 800-895-0198
Non-US-based callers, call: 785-424-105
WHEN: 10am EST, 4pm CET, September 5