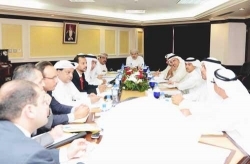 SALALAH — A co-ordination meeting was held at Crowne Plaza Salalah yesterday for officials of the GCC Chambers and representatives of the Secretariat General and some regional organizations concerned about food security in the GCC states under the chairmanship of Khalil bin Abdullah al Khonji, Chairman of the Federation of GCC Chambers.

The meeting comes within the GCC countries' efforts to achieve food security systems of the member states and in preparation for the expanded meeting to be held between the Secretariat General of the Federation of GCC Chambers and the GCC Secretariat General, which will address the topic of food security and discuss the role expected to be played by the private sector to achieve food security together with the fundamental role of the public sector and the Gulf, Arab and international relevant organizations.

Al Khonji said that food investment outside the GCC states needs to be reconsidered under global variables, particularly political and economic ones that may pose a major threat to the Gulf food security. He added that the meeting decided to form a working group composed of representatives of the GCC Secretariat General, the Islamic Development Bank Group, Qatar National Food Security Programme, African-Arab Organisation for Investment and Real Estate and Commercial Development to examine the results reached by this meeting about the themes on achieving reserves of food, livestock and agriculture along with water resources among others. — ONA RIYADH: The Grain Silos and Flour Mills Organization (GSFMO) has 2.52 million tons of wheat in reserve and enough to fill local demand for 10 months due to the recent completion of expansion projects, business daily Al-Eqtisadiah reported.

“We plan to continue expanding and in three years increase our storage capacity to 3.2 tons and enough to satisfy the Kingdom’s need for wheat for a whole year,” he said.

The Riyadh-based organization now has 11 mills throughout the Kingdom, including nine in Riyadh, Makkah, Asir, the Eastern Province, Qasim, Tabuk, Hail, Al-Jouf and Madinah. “The combined daily production capacity of these mills is 280,110 tons,” Al-Khiraiji said.

Milling capacity at the flourmills in Riyadh, Makkah and Asir represented 59 percent of total production, he added.

Al-Khiraiji said fodder factories in Asir, Qasim, the Eastern Province, Riyadh and Makkah had a combined daily milling capacity of 100,200 tons. “The fodder factories of Qasim and Asir alone contribute 57 percent to our total production figures,” he said.

Imported wheat from European countries and Canada make up 62 percent of the Kingdom’s entire wheat imports.

Khalil Khanji, Chairman of the GCC Union of Trade Chambers expects the six GCC member countries along with foreign partners, to establish strategic food storage facilities in an effort to prevent a potential world food crisis.

“This is a precautionary measure against developments that may harm GCC foreign food investment as a result of political or economic crises,” he explained.

Khanji quoted studies that state GCC countries could not achieve food security through agricultural investments made by the Kingdom abroad. “We will not be able to import foods from our agricultural projects in foreign countries in time of war or conflict,” he warned.

Khanji advised GCC countries to resort to the strategic storing of wheat, rice and other foods instead of depending on foreign investments.