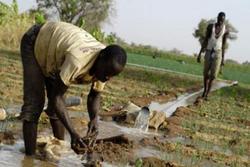 "We know that the so-called land grab is done by consent of those concerned in those countries," says IFAD President,  Dr Anayo Nwanze. "For the simple reason that it takes two to tango."
Daily Times (Abuja) | August 27, 2012

Says Western investments in African agriculture is no land grab

The International Fund for Agricultural Development (IFAD) has rejected the perception of agricultural investment by Western nations in developing countries as ``land grabbing'' or neocolonialism.

IFAD President,  Dr Anayo Nwanze, while speaking at a forum in Abuja, on Sunday, said that the term land grab gave an impression that the people’s land were being taken over without their consent.

"The term land grab is a certainly an unfortunate one in the sense that it gives you the impression of people coming to grab your land without your consent.

"On the contrary, we know that the so-called land grab is done by consent of those concerned in those countries.

"Either by invitation or otherwise and that is why I tend not to accept the terminology land grab and I refer to it as investment in agriculture.

"For the simple reason that it takes two to tango. Perhaps it’s a governance issue in some countries, attracted by money that is offered and this is why the international community has put together what is called guidelines to responsible investment in agriculture.

"The idea is to help provide guidelines to both investors and recipients of this process.

"I don’t think there is anything wrong if somebody says he wants to invest in my country, now it is how they do it and how we negotiate it.

"Countries have the responsibility to negotiate the best they can to ensure the benefit of such investments that accrue to the country and to the population.

Nwanze expressed regret that African markets were the least developed in the world, adding that the continent also lacked the capacity to generate energy.

Nwanze said, however, that Africa is the next frontier for development.

"Africa, in my own opinion, is next frontier for development; we have an opportunity here to capitalise on it; it is not neo-colonialism, if we know exactly what gain is at stake here.

"Where else in the world do you have opportunities for generating energy: energy for agriculture, energy for industrialisation, energy for electrification?

"If you turn all these statistics around and you talk about climate change, which other part of the world can you invest one dollar and double your yield, yet, not polluting the environment, increasing wealth, creating vibrant markets.

"I would say that rather than cry that people are grabbing our lands, let’s ensure that we help our leaders who are negotiating this land deals, make the best out of it.

"Ensure that it is time-bound and that the communities that are affected benefit from it.

"So, rather than cry foul, I will say let’s take the problem head on and turn it around to the benefit of those countries that posses the potential to feed themselves and feed the world.