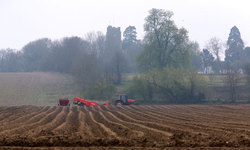 A tractor at work in a field near Hoxne in Suffolk. Photograph: Graham Turner for the Guardian

It is known as "gold with a coupon". English farmland has trebled in value over the past decade and now averages more than £6,000 an acre. While farmers still make up at least half of all buyers, estate agents have seen an influx of City bankers as well as buyers from overseas – crisis-stricken Greece and Italy, along with India and China. In the next five years it is expected to rise in value by more than two-thirds.

The appeal of farmland is that it is a safe-haven asset, like gold, but also gives annual returns of 2-3%. On top of that there are tax advantages; most importantly, agricultural land is exempt from inheritance tax as long as it is managed as a farm. And as Mark Twain said: "Buy land. They're not making it any more."

"Every time there is a wobble in Europe you see more buyers," says Christopher Miles, head of rural agency for Savills' eastern region. "Greeks, Italians and French are buying in central London and some of those are also buying farmland. It's just a movement of capital between different countries."

He has also seen growing interest from Indians, split fairly evenly between investors and lifestyle buyers. He recalled that from 2005 the market was flooded by Danish and Irish investors snapping up cheap land, fuelling a 150% increase in values in the east of England. Burdened with debt, they have since cashed in and returned home.

A rival agent, Knight Frank, is starting to see bids from private Chinese investors. James Prewett, the firm's head of regional farm sales in central and western England, said: "They want to buy social status and a piece of England. Post the London home, the next obvious thing they want to buy is a smallholding – 50-60 acres."

But Africa is the main playground for Chinese institutional investors keen to buy large plots of land. In the UK, only 100,000 acres of land change hands every year.

Savills is predicting that UK farmland prices will climb by 36% by 2017, an average rise of about 6% a year. Last year the proportion of farmers selling land was at its lowest since 1993, while the number of farmers buying land to expand their businesses continues to rise.

Knight Frank sold 357 acres at Vine Farm in Langford, Bedfordshire, well above the £2.6m guide price, while a three-bed farmhouse with 40 acres at Rockwell near Leighton Buzzard in Buckinghamshire went for around £750,000. Apart from new nationalities, there have been other changes in the makeup of buyers. Whereas before the financial crisis more than 30% of buyers were acquiring a farm to live there, these lifestyle buyers have melted away and a similar proportion is now made up of City bankers and family offices buying up blocks of arable land in the east of England. They will then get a local farmer to manage the land. But it doesn't look like the pension funds which were acquiring farmland in the 1970s and early 80s will be coming back, because the market is too small.

Andrew Shirley, the head of rural research at Knight Frank, said: "Prior to the credit crunch we were seeing a lot of people setting up farmland funds. They all disappeared. Now we're seeing a lot of them coming back."

Sharp rises in prices of commodities such as corn and wheat due to poor harvests in the US and Russia have made farmland more attractive as an investment.

Mark Hill, the head of food and agriculture at Deloitte, pointed out that land values have gone up around the world, with growing concerns about the security of food supply. Rising land values will ultimately feed through into food prices, which are already increasing, he warned.