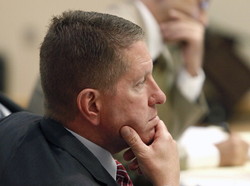 Iowa Regent Bruce Rastetter, owner of AgriSol Energy
"Agrisol Energy initially explored developing about 800,000 acres of land in Tanzania, but company officials now say it has no plans of expanding beyond the 35,000 acres it has leased..." - Des Moines Register

August 23, 2012: Today the Iowa Ethics and Campaign Disclosure Board voted to dismiss Iowa CCI's conflict of interest complaint against Iowa Regent Bruce Rastetter saying it wasn't "legally sufficient" for them to do an investigation.

The ethics complaint was filed by the Des Moines-based citizen group, Iowa Citizens for Community Improvement, for misusing his membership on the Iowa Board of Regents that oversees Iowa's public universities to advance an "African land grab" that involved Iowa State University (ISU), after the land deal was exposed by the Oakland Institute in June 2011. In this land deal, which had been hidden away from public scrutiny and discussion,  Bruce Rastetter's AgriSol Energy LLC partnered with ISU College of Agriculture and Life Sciences to lease more than 800,000 acres in Tanzania without public debate or consent, while displacing over 162,000 villagers. The Board today chose to take a narrow definition of state code and cited that Rastetter has never taken a public vote as a Regent on the Tanzania/ISU project as justification for dismissal.

Barb Kalbach, a CCI member, nurse, and family farmer read a strong statement to the press immediately after the decision: http://iowacci.org/in-the-news/rastetter-ethics-complaint-dismissed-cci-members-slam-decision/

"The Iowa ethics board made the wrong decision today, a decision that puts them squarely on the side of bad government of, by, and for the corporations. But the truth is, we win no matter what you did with our complaint today. Because the power of ordinary people to shed light on the inner workings of a government captured by corporate power has been proven. Rastetter's disclosure, recusal, and amended financial form were concessions we extracted from him because of public pressure. We were doing our job while the ethics board was asleep at the wheel. And if any changes are made in the future, it will be because of people like us."

Despite today's ruling, the people have won!

* Citizen and student mobilization led to Iowa State University completely withdrawing from the deal in February 2012.

* Rastetter was forced to file an expanded financial disclosure filing this week after the initial disclosure identified Rastetter's occupation merely as "Farming, self-employed" and included only the phrase "investment income" in response to a question on income sources exceeding $1,000. The updated disclosure describes Rastetter's position as CEO of Summit Farms and the Summit Group, the umbrella organization that includes Agrisol Energy. Ethics board members and staff are planning to propose changes to its filing process to ensure more detailed financial disclosures in future.

* And most important, Agrisol Energy's initial plans involved a take over of 800,000 acres of land in Tanzania. The company officials now say "it has no plans of expanding beyond the 35,000 acres it has leased to harvest crops like corn and soybeans."

Despite today's ruling the CCI members have pledged to continue their efforts and make their case in the public arena that Rastetter is not fit to serve on the Board of Regents. The Oakland Institute will continue to monitor the situation on the ground  and ensure that the plight of the villagers (former Burundians refugees) impacted by AgriSol's land investment is kept in the public eye.

The Oakland Institute is grateful to Iowa CCI members, many who are family farmers impacted adversely by large factory farms in the US, and have helped debunk the myth that AgriSol's large industrial  plantations will benefit Tanzanians! As Barb Kalbach said today, "We were doing our job while the ethics board was asleep at the wheel. And if any changes are made in the future, it will be because of people like us."