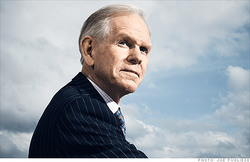 "This threat is badly underestimated by almost everybody and all institutions with the possible exception of some military establishments," writes Grantham

Global investors should have as much as 30 per cent of their portfolios exposed to natural resources, more than double the current market average, because of a burgeoning worldwide food crisis, GMO’s Jeremy Grantham says.

The droughts afflicting farmers in the US and the subsequent spike in food commodity prices are just forerunners to the climate-change fallout that will see many food-importing developing countries struggle to feed their populations, according to Grantham.

The co-founder and chief investment strategist at Boston-based asset management firm, Grantham, Mayo, Van Otterloo and Company (GMO), warned investors in his most recent quarterly letter that long-term investors should position their portfolios for a resource-scarce world and decades of rising commodity prices.

“For any responsible investment group with a 10-year horizon or longer, one should move steadily to adopt a major holding of resource-related investments,” Grantham advises.

Not only should investors look to gain exposure to natural resources, but they should also prepare for how the rising resource prices will impact the rest of their portfolios.

“I am now also convinced that rising resource prices will worsen the prospects of the portfolio, by both squeezing profit margins and reducing overall growth,” he warns.

“If correct, this will have serious implications for longer term endowments and pension fund returns: among other factors, a lower growth for GDP in the long term may mean lower returns on all capital.”

Rise, natural resources
Grantham advocates allocating 30 per cent of a total portfolio to natural resource plays, with half of this allocated to what he calls a “senior or preferred component” of forestry and farms.

“My personal, somewhat arbitrary, breakdown of a targeted 30 per cent is to have 15 per cent in forestry and farms, 10 per cent in ‘stuff in the ground’ and 5 per cent in resource efficiency plays,” Grantham outlines.

His views on increasing exposure to natural resources are shared by a number of large institutional investors, which have made strong forays into this space in recent years.

The innovative Yale Endowment is one such leader, with its latest update to investors detailing a sharpened focus on natural resources.

The endowment is closing in on its target allocation of 9 per cent to natural resources, currently allocating 8.7 per cent to a portfolio of opportunities that includes timberland, oil and gas, and metals and mining.

Its longstanding oil and gas (begun in 1986) and timber (1996) have achieved 16.9 per cent per annum since inception, the endowment reports.

Its investment team aims to achieve a 6 per cent real return target from its natural resource holdings.

In Europe, long-term institutional investors are also looking to be early movers into agriculture.

Swedish buffer fund AP2 last year announced a $250-million joint venture with a US pension fund and financial services provider to buy farmland in the United States, Brazil and Australia.

AP2 invested the money into a newly formed company that has joint venture partner, TIAA-CREF, as its majority shareholder and administrator. TIAA-CREF already has extensive agriculture investments worth more than $2 billion, which include 400 farms, vineyards and orchards in the United States, Brazil, Australia and Eastern Europe.

Move for food
In his broad-ranging quarterly letter to investors, Grantham drew from analyses of climate, agriculture and water resources to make the case that the world is five years into a severe – and likely ongoing – food crisis.

He predicts these food shortages will threaten poor countries with increased malnutrition, starvation and even collapse.

“Resource squabbles and waves of food-induced migration will threaten global stability and global growth, this threat is badly underestimated by almost everybody and all institutions, with the possible exception of some military establishments,” Grantham says.

He warns that the commonly held assumption of a minimum 60-per-cent increase in food production is needed by 2050 to feed the forecast world population of 9 billion is unachievable.

Grantham highlighted water shortages, the degradation of farming land around the world and the growing cost, diminishing stores and effectiveness of fertilisers as major hindrances to sustaining food production, even at the current inadequate levels.

Recent US drought-driven spikes in grain prices Grantham predicts are just a foretaste of things to come and particularly concerning, given the widespread plantings undertaken after 2008 shortages led to food-price riots in some developing countries.

For investors, higher input costs driven by a scarcity of natural resources will impact company profit margins and economic growth, and squeeze national budgets in the developed world. In the developing world, it could lead to much more volatile political and social instability, he predicts.

Grantham advises investors look to what he calls “quality” stocks.

These companies either have a much lower resource cost as percentage of total revenues or have a higher profit-margin base to buffer against rising costs.