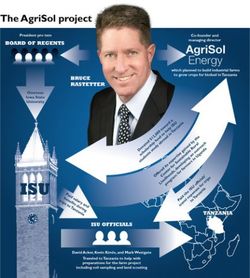 IOWA CITY, Iowa (AP) - Iowa Regent Bruce Rastetter on Thursday defended working with Iowa State University to pursue a large-scale land development in Africa that could have benefited himself financially and blamed growing criticism over his involvement on misinformation and public relations mistakes.

Environmentalists and watchdog groups accuse the prominent Republican businessman of trying to use his influence as a member of the board that governs Iowa State to benefit AgriSol Energy, an investment group he founded and manages that is developing farmland in Tanzania. Iowa State withdrew from the project in February in the face of mounting criticism and a state ethics board next month will consider a complaint alleging Rastetter had a clear conflict of interest.

In an interview Thursday with The Associated Press, Rastetter said he doesn't think he did anything unethical in pursuing the plan. If it had succeeded, he said it could have not only made profit over time - he didn't say how much, but tens of millions of dollars were at stake - but benefited the Tanzanian people by increasing their food supply and spurring economic development. He said his goal was to invest in a country that needs help.

He said AgriSol dropped its plan to develop land it had considered using after the company learned about problems in the Tanzanian government's removal of up to 160,000 Burundi refugees who've been living there. Instead, he said AgriSol is developing uninhabited land elsewhere in Tanzania on a smaller scale.

Critics such as the Oakland Institute, a California watchdog that monitors land deals in Africa, have denounced AgriSol's plans as a greedy land grab that improperly used Iowa State's reputation and expertise. He said he would never seek to displace refugees but critics' claims went unchallenged for months as Rastetter kept quiet. He blamed his silence for allowing misinformation to "catch hold" and pressure to mount on ISU to pull out.

"I stayed out of it because of being a regent, not wanting to look like I was trying to influence anyone in the process," he said. "I should have been more proactive."

Rastetter also acknowledged that the project "might have been cleaner" from the public's standpoint if a university professor whose job is funded by his donations had not been involved.

On Thursday, environmental group Food and Water Watch joined Iowa Citizens for Community Improvement's ethics complaint alleging that Rastetter abused his position. The groups have been holding meetings across Iowa in which they've portrayed Rastetter as emblematic of what they believe is the growing influence of corporations over land grant universities. Members of Iowa CCI, known for its confrontational approach, surprised aides to Gov. Terry Branstad at their homes last weekend to lobby for Rastetter's removal from the board.

Their complaint also alleges that Rastetter falsified his state financial disclosure form when he listed himself as a self-employed farmer and didn't disclose his AgriSol investment. Rastetter said he is a self-employed farmer, but is considering revising the disclosure to provide more details about his investments because he "has nothing to hide."

Critics have noted that Rastetter was appointed a regent and became the board's president pro tem after donating $160,000 to Branstad. Rastetter in 2007 gave $1.75 million to ISU's College of Agriculture to create an endowed professorship in agricultural entrepreneurship, a job held by Kevin Kimle, who helped advance AgriSol's work in Tanzania.

Rastetter said he was motivated to donate to Branstad because of his policies and gave to Iowa State so that more students would learn about business. He said he asked Branstad to make him a regent so he could serve the public, noting he already helped convince lawmakers to increase funding for Iowa's public universities by millions.

Rastetter said that public-private partnerships were good for universities and the public. ISU officials were to implement an AgriSol-funded program to provide a range of services and training to help farmers living nearby. He said Kimle, the Rastetter Chair of Agricultural Entrepreneurship, asked to get involved as a consultant for "the right reasons" because of his expertise, but perhaps should have been rejected.

He said he respected Iowa State's decision to pull out, "because the controversy and misinformation was unrelenting." But Rastetter said Tanzanian farmers will miss the school's expertise and students will lose opportunities to study abroad.
Rastetter and AgriSol had been working with Iowa State for more than a year to plan the project before he became a regent. Weeks after he joined the board, he identified AgriSol as a potential conflict in a form held by the board. He said he had no "direct involvement" in discussions with Iowa State after that, but records show otherwise.

Last June, Rastetter emailed assistant ISU dean David Acker asking for a plan detailing "the division of responsibilities between the university and our commercial side." Acker responded with a memo asking AgriSol to fund a five-year contract for the university's work in Tanzania.

Rastetter said he doesn't view the exchange as improper, and noted that no funding agreement was reached. He also noted that plans for Iowa State to seek a federal grant for the project with AgriSol were dropped after university officials identified the potential conflict in helping a regent's investment firm receive tax dollars.