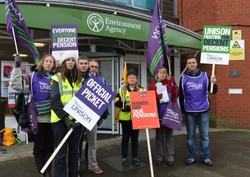 Workers at the Environment Agency protesting cuts to their pensions, last 30 November 2011

The £1.9bn pension fund of the UK’s Environment Agency is set to unveil a new investment strategy later this month, including plans to invest in farmland and forestry for the first time.

The fund, which is known in the industry for its focus on sustainable investing, could put up to £150m into farmland and commercial timberland, according to recently-published papers.

Howard Pearce, the fund's longstanding investments chief, was unavailable for comment last week as he was on holiday, but a spokeswoman for the Agency confirmed the move: “The Environment Agency will be unveiling full details of its new new Active Fund investment strategy for 2013 and 2014 in the next couple of weeks.”

Consultants and asset managers have been making the investment case for farmland and forestry for several years; in the long term global demand for food and building materials will only rise, while supply becomes more constrained thanks to climate change.

Though it is common for US pension funds to invest in these assets, it is comparatively rare in the UK and Europe, though this is changing.

The UK’s £10bn Pension Protection Fund has set out plans to invest and is currently looking for fund managers. Tiaa-Cref, the US teachers’ pension fund, is raising a $2bn fund from other institutional investors.

The Environment Agency’s farmland and forestry investments will sit alongside a greater allocation to emerging markets equities and corporate bonds, and form part of a more dynamic and flexible strategy for the whole fund, the documents said.

Instead of maintaining fixed allocations to different types of investments, in future the pension fund will vary the amount it holds in stocks, bonds and other assets within pre-specified ranges.