Dick buys AAco shares to 'get in debate' 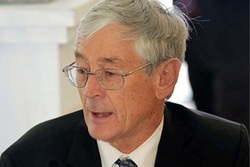 Dick buys AAco shares to 'get in debate'

OUTSPOKEN entrepreneur and aviator Dick Smith has bought $1 million worth of shares in Australian Agricultural Co (AAco) - Australia's second-largest landholder - because he doesn't want to sound hypocritical when he campaigns against foreign ownership of farms.

"I am concerned about foreigners buying all our good agricultural land," he told the Australian Financial Review," and so I thought I had better own some of this land so I can talk about this issue."

Mr Smith, whose comments came after the federal government recently pledged to create a national register for foreign ownership of farms, is now one of the largest shareholders in AAco, which owns about 7 million hectares of prime pastoral land.

A Senate review on foreign ownership rules has put the spotlight on growing purchases by offshore companies, most notably from China.

Senators Barnaby Joyce and Bill Heffernan, as well as lower house members such as Dan Tehan, have been pushing for greater transparency over foreign control of farms.

"I don't have a great deal of knowledge about the company but I just wanted to own land. The Chinese are buying up a lot of it," Mr Smith said.

AAco is already more than 60 per cent owned by offshore interests including British billionaire Joe Lewis, US-based fund managers and a joint venture between Dubai's IFFCO and Malaysia's Felda.

"My adviser told me not to buy into the company, but I said I should so that I could talk about this issue," Mr Smith said.

Mr Smith, whose slogan is "Buy Australian", extensively promotes local ownership of food production and has called on others to follow suit in his purchase of agricultural land.

"I would also like to get Clive Palmer, for example, to invest here too," Mr Smith said.

But Mr Palmer told the Financial Review he was already a proud owner of agricultural land, with cattle and horse properties totalling more than 2000 hectares.

He said these properties were separate from the mining land he owned.

"I own plenty of large rural properties," Mr Palmer said.

"On the foreign investment debate, I think people need to remember that Australia has always needed foreign capital," he said, "But we do need to protect the rules of the game when the capital comes here."

AAco's chief executive David Farley has long been a proponent of opening the door to foreign capital to invest in Australian agriculture.

He said people should accept that Australian agriculture has a history of being foreign-owned but they should also be aware of the dangers.

"My greatest concern is about the ongoing stewardship of the land. Foreign investors must keep investing in industry structures and technology to keep our farms productive," he said.

AAco has about 20 cattle stations spread across Queensland and the Northern Territory.

Mr Smith said he had visited some of the AAco properties, including the prized cattle station Brunette Downs.

"They are magnificent properties," Mr Smith said. " I want Australia to follow the Russians and the Chinese and become more restrictive about foreign ownership of our good farms."

The foreign ownership of agriculture in Australia is a hot issue, especially for farmers.

Rice farmers Julian Menagazzo and Ian Blight said they had refused a takeover of the rice company Sunrice, in which they hold shares, because they believed the Spanish company seeking to buy it would have bought it "on the cheap".

The takeover has since been rejected but the company's earnings have rebounded strongly and the struggling company is looking profitable again.

An Australian Senate committee is examining the Foreign Investment Review Board national interest test and report in September.