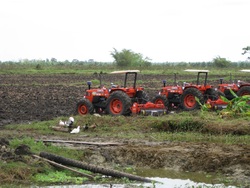 The government’s long-discussed plan to launch a massive food estate in Merauke, Papua in a bid to boost the nation’s food production is facing uncertainty amid land acquisition problems, a top ministry official says.

The Agriculture Ministry’s research and development agency chief, Haryono, said on Wednesday the total land for the food estate in the area had been reduced from 1 million hectares to 200,000 hectares due to land issues.

“We were planning to have at least 1 million hectares of land [for the project], but then the land problems, such as trying to acquire customary land, occurred; hence the current figure,” he said on the sidelines of an international seminar on rice production.

The security situation in some parts of Papua province in recent months has been chaotic with a number of shooting incidents claiming dozens of civilian lives. In response to these events, the agency was planning to conduct new research into the feasibility of building a food estate in the area.

He added, however, that the government was still hoping the Merauke project, known as the Merauke Integrated Food and Energy Estate (MIFEE), could still be implemented by 2015 as planned by Coordinating Economic Minister Hatta Rajasa last year.

Haryono said that, based on the assumption that one hectare of land in the Merauke food estate could produce five tons of rice per harvest then overall, the project would yield at least 500,000 tons of rice if there were two harvest periods annually, even if the available land only amounted to 50,000 hectares.

Indonesia’s representative for the International Rice Research Institute (IRRI), Zulkifli Zaini, said the government should start focusing on other potential areas in which to develop food estates due to the protracted land issues in Papua.

“I think in the short term, the government could focus their attention on other areas, such as East Kalimantan and South Sumatra because, next to the customary-land brouhaha, there are other technical problems with Papua’s land, such as the drainage system,” he said.

Indonesia is currently the world’s third-largest rice consumer. The country has intermittently imported rice to meet the national demand. In 2008 and 2009, Indonesia was self-sufficient but the year after that,
it started to import again.

The nation’s annual rice consumption tops 139 kilograms per capita. Last year, at least Rp 125 trillion (US$13.25 billion) had been spent on imports according to statistics by the Indonesian Farmers’ Association (HKTI). Data by the Central Statistics Agency in 2011 showed the country imported 1.87 million tons of rice.

MIFEE, which is planned to start operations in 2014, is part of the government’s master plan to help achieve national food sufficiency, eliminating the need to rely on imports.