Agrarian reform in the 21st century 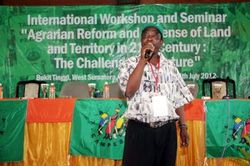 Agrarian Reform in the 21st Century
Press release from the international seminar, Indonesia

DEFENDING LAND AND TERRITORY, BUILDING A NEW CIVILIZATION AND FIGHTING FOR OUR FUTURE

La Via Campesina and the Global Campaign on Agrarian Reform with Serikat Petani Indonesia (Indonesian Peasant Union) as local host are currently holding an international workshop and seminar entitled, “Agrarian Reform and the Defense of Land and Territory in the 21st century: The Challenge and Future” from July 10 to 14, 2012 in Bukittinggi, West Sumatra, Indonesia.

This international strategy meeting is happening at a time of a global downturn, the worst since the Global Depression in the 1930’s. The multiple crises of food, jobs, livelihood, climate, energy, and finance, coupled with the staggering numbers of worsening poverty, inequality, hunger and environmental destruction all stand testament to the destruction that capitalism and the neoliberal policies have wrought.

And now, there are 1 billion people living in hunger, the majority of which are living in Asia. This increase in hunger can be correlated to the drastic increase in food prices, making it even more difficult for people, especially those living in poverty, to afford food for themselves and their families. More importantly though, the worsening hunger can be linked to the expansion of the industrial agricultural development, that promotes mono crops and massive land grabbing. Land grabbing is currently a global phenomenon, led by local, national and transnational elites, corporations and investors with the collusion of some governments, with the aim of controlling the world’s remaining and most precious resources. The World Bank and regional development banks are also facilitating these land and resource grabs through their policies.

Because of the global crises, taking control of the earth’s remaining resources – land, water, forests, biodiversity – has become crucial to the survival of capitalism and the corporations. At the recently concluded Earth Summit in Rio de Janeiro, Brasil, this resource grab has been institutionalized under the label of “green economy.” 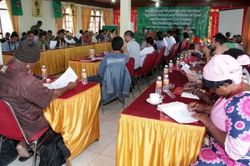 All these recent developments and changing realities in the world, make this international meeting all the more relevant. The delegates from 26 countries, from Latin America, Africa, Europe and Asia, which include members and leaders of La Via Campesina, the Global Campaign on Agrarian Reform and other progressive organizations, other social movement leaders and academics, have all come together to rethink and develop new strategies for achieving agrarian reform in the 21st century, one that should be based on the strengths of social justice, radical traditions of past agrarian reforms, addresses past weaknesses and most importantly should be based on the foundations of food sovereignty and agroecology.

As the General Coordinator of La Via Campesina, Henry Saragih, stated at the opening of the meeting, “The destruction and grabbing of resources from peasants and poor people have intensified and if we are to succeed in defending our land, territory and our very future, we need to come together and identify clearly the kind of Agrarian Reform we are looking for and the strategy for which we achieve it.”

La Via Campesina is an international movement of peasants, small- and medium-sized producers, landless, rural women, indigenous people, rural youth and agricultural workers. It is an autonomous, pluralist and multicultural movement, independent of any political, economic, or other type of affiliation. Born in 1993, La Via Campesina now gathers about 150 organisations in 70 countries in Asia, Africa, Europe, and the Americas.

The Global Campaign on Agrarian Reform is La Via Campesina’s campaign to support the local struggles of landless peasants around the world for access to land, and to support people’s who are trying to defend their territories from land grabbing TNCs and governments. Partners in this campaign are FIAN International and the Land Research Action Network.

There are delegates from 26 countries and are all available for interview upon request.