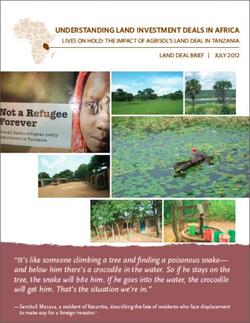 AgriSol's land deal in Tanzania creates an uncertain future for more than 160,000 people

Oakland, CA - A new report by the Oakland Institute, Lives on Hold, exposes the consequences of Iowa-based AgriSol Energy LLC's plans to lease more than 800,000 acres in Tanzania. The project initiated in 2007-2008 has moved forward without public debate or consent, and will evict more than 160,000 long-term residents of Katumba and Mishamo, who remain in the dark over compensation and relocation plans. The AgriSol land deal is a part of Kilimo Kwanza, or Agriculture First, the Tanzanian government's scheme to promote agricultural development through public-private partnerships.

In June 2011, the Oakland Institute revealed how Iowa-based Bruce Rastetter, CEO of AgriSol Energy, leveraged the involvement of Iowa State University's College of Agriculture and Life Sciences to provide legitimacy to this deal. Initially masquerading the project as responsible agricultural investment, the university completely withdrew any support or association with it in February 2012 under growing public pressure. While AgriSol claims to have halted operations in Katumba and Mishamo until the refugees have been relocated, Lives on Hold depicts how the relocation is to be accomplished.

"Caught in the crossfire of this egregious land deal are more than 160,000 newly naturalized Tanzanians--former Burundian refugees who fled civil war more than 40 years ago. Initially promised citizenship, the residents still await their papers, conditional on them vacating their homes and lands in order to make way for the foreign investor. The residents have been banned from cultivating crops including perennial crops such as cassava or building new homes and businesses, leaving them with no other option but to consider moving. This is how the situation will be resolved for AgriSol," said Anuradha Mittal, Executive Director of the Oakland Institute and coauthor of the report.

A Katumba resident, a farmer and house builder, who's name has been withheld to ensure his safety told the research team: "I'm greatly disappointed by the decision that forbids us from making progress. Our livelihoods, activities have been stranded."

Lives on Hold documents how the residents of the Katumba settlement contribute to the economic and agricultural well-being of the region. While initially referred to as "abandoned refugee camps" by AgriSol, OI's field work depicts the Katumba settlement as a thriving community with well-established homes, farms, places of worship, and businesses. Yet the policy of Kilimo Kwanza is being misused to subject the villagers to human rights abuses, which range from the burning down of houses and crops and violation of their freedom of speech to inequities in social services.

Amid the announcement of relocation in a town hall-style meeting with the authorities in 2010, several villagers reported threats and arrests by the security forces for demanding fair compensation; the argument against their inquiry amounted to "Katumba is not your land for you to start asking questions." But residents of the settlement have called Katumba their home for the last 40 years.
"It is true that the Tanzanian government donated the land for the camp. But this is a case of good will gone wrong," said Mittal. There has been significant value added to the land by the refugees during the past 40 years. Currently, the compensation stands at $200 per person in a family. This paltry payment is for the land their livelihoods depend on, upon which their houses have been built, where the crops that feed them and the neighboring communities are grown, and where they have built churches and other community infrastructure.

Lives on Hold also reveals how AgriSol plans to develop large-scale monocrops, use high levels of chemicals, and even ask for changes in the national biosafety regulations so that genetically modified crops can be grown--all within a protected forest reserve and the Malagarasi-Moyowosi wetland system, one of the wetland sites protected by the international Ramsar Convention on Wetlands.

AgriSol's model of industrial agriculture poses a high risk to biodiversity, with the pollution of rivers and drying out of water sources being highly likely, which will affect the health of the people downstream and also wildlife in the area. The protected forest reserve and its biodiversity will be sacrificed for a large-scale plantation for exports. The Oakland Institute is asserting that the needs of the Burundian Tanzanians in Katumba must be met clearly, efficiently, and fairly while preserving one of the world's most important and fragile waterways and landscape.

Earlier this month, an Iowa-based group, Iowa Citizens for Community Improvement, filed an official conflict of interest complaint against Rastetter with the Iowa Ethics and Campaign Disclosure Board, and are lobbying for Bruce Rastetter to be removed as Iowa Board of Regents President Pro Tem.
The Oakland Institute first exposed AgriSol's land investment deal in June 2011. View the June 2011 report and related documents here.

The Oakland Institute is an independent policy think tank, bringing fresh ideas and bold action to the most pressing social, economic, and environmental issues of our time.