The European Union and the global land grab 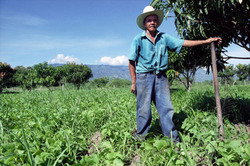 Hands Off The Land Factsheet | June 2012

The European Union and the Global Land Grab

The European Union and the Global Land Grab [PDF, 193KB]

In recent years, around the globe through numerous mechanisms, peasants, pastoralists, fishers’ communities, rural women and indigenous peoples are losing their once effective control over significant areas of the world’s land, water, wetlands, pasturelands, fisheries and forests – including their right to decide how these natural resources will be used, when and by whom, at what scale and for what purposes, for generations to come. This control is being captured by various configurations of actors (foreign and domestic) from big corporate business and finance and government, often for large-scale industrial and industrial agriculture ventures and often packaged as large-scale investment for rural development.

But rather than being investment that is going to benefit the majority of rural people, especially the poorest and most vulnerable, this process constitutes a new wave of land and water ‘grabbing’. It is a global phenomenon whereby the access, use and right to land and other closely associated natural resources is being taken over - on a large-scale and/or by large-scale capital – resulting in a cascade of negative impacts on rural livelihoods and ecologies, human rights, and local food security. In order to stop such harmful effects, land grabbing and its contributing factors must be opposed.

This Fact Sheet highlights the involvement of the EU in the global land grab, both directly through the involvement of European capital and corporations in the acquisition of land and indirectly, through the suite of EU policies which are transforming land into a global commodity. It concludes with a number of concrete demands and proposals for the EU to end its collusion in the global land grab and align with international human rights law, especially the Right to Food.