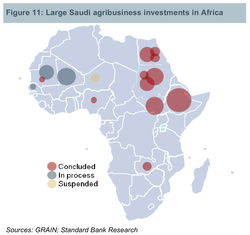 Saudi Arabia is investing in agricultural land in Africa as the state’s local crop production diminish.

Saudi Arabia has a major problem with water scarcity and only 1% of its land is suitable for agriculture.

“Saudi investors have reportedly planned or concluded investments covering 800,000 hectares of land in Africa (accounting for almost 70% of all large deals struck by Saudi firms globally),” says Standard Bank in a recent report.

But why Africa, and what are the opportunities and problems Saudi investment in Africa might catalyse?

Saudi Arabia is approaching a food production crisis that is a major problem for its growing population that is consuming more food. “Local poultry production in 2012 is likely to be almost 800,000 tonnes lower than consumption, while wheat production will be deficient by around 1,800,000 tonnes and maize by 1,880,000 tonnes,” notes Standard Bank’s report. Saudi Arabia’s water scarcity is also problematic, with water consumption having more than doubled since 2006.

This has led to the Saudi government deciding to phase out local wheat production. By 2016 it will no longer purchase locally-grown wheat. The country is already estimated to import around 2.5 million tonnes of wheat between 2012/2013, and this is expected to increase to 3.3 million tonnes annually in the coming years.

However, relying on food imports is not ideal, with the country becoming vulnerable to unstable global supply and costs.

The solution: invest in foreign agricultural production as a “means to ensure a long-term, reliable supply of stable commodities,” says the report. It is because of this that the “Saudi government established the King Abdullah Initiative for Saudi Agriculture Investment Abroad under which large Saudi agribusiness firms are provided with credit, as well as strategic and logistical support to invest abroad”.

With 60% of the world’s uncultivated arable land being in Africa, it’s no wonder that Saudi Arabia has an eye on the continent, with almost 70% of all concluded and planned investments in offshore agriculture being in Africa.

“Factors considered in identifying suitable host countries for agricultural investments include the availability of resources and infrastructure, political and socio-economic stability, and favourable relations with the Saudi government,” notes the report. “Under this initiative, bilateral government-to-government deals can be struck which allow more fluid access for Saudi firms in target markets.”

An example of a Saudi investment in agricultural land in Africa is the Ethiopian government leasing 10,000 hectares to the Saudi Star Agricultural Development in 2008. The company has plans to acquire another 290,000 hectares of land.

“A guiding principle of the initiative is that the investor must have the right to export at least 50% of the farmed produce to Saudi Arabia,” says the report. “The primary products targeted are wheat, barley and maize.”

Weighing up the pros and cons for Africa

Africa needs investment for the improvement of infrastructure and to boost employment opportunities and skills development. Agricultural investment by Saudi firms could help with all these things and more.

However, Standard Bank points out that attention needs to be given to the possible negative ramifications. “Under-selling of agricultural assets (both land and, perhaps more critically, water) remains a profound threat. Meanwhile, as large tracts of land are sold or leased off to foreign investors, the social strains brought about by the relocation of local inhabitants has the potential to be deeply destabilising.”

An ideal investment in Africa’s agricultural land would include directing investment into agricultural infrastructure (such as storage and transport); providing employment and training for local communities; and ensuring that a generous portion of the crops go to local markets. The report also argues that “transparency in the manner in which land deals are struck, and adequate consultation with affected local communities, must be compulsory”.