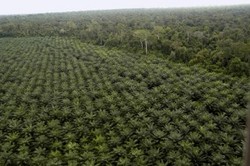 Tension between the company’s ambitions and the Malaysian rural poor is rising because of alleged systemic undervaluation of oil palm fruits and the use of power politics to grab their land.

Research company behind the Zembla programme on cluster bombs looks into the IPO by the Malaysian palm oil giant.

Malaysian oil palm plantation company, Felda Global Ventures Holdings (FGVH), aims to raise RM 9.95 billion (€ 2.5 billion) by its listing tomorrow (June 28), making it the world’s second largest IPO this year after Facebook. But a closer look at the company raises concerns over another listing debacle, which may turn out worse than Facebook’s IPO. Investors should be cautious as an accumulation of environmental, social and governance risks could result in serious financial risks. Set up in 2007 as the overseas branch of the Federal Land Development Authority (FELDA), FGVH now is the third largest listed oil palm oil company globally. By taking control of its parent’s landbank, it has a total of 424,995 ha of land in Malaysia and Indonesia under management. In addition, the company is the largest crude palm oil (CPO) trader globally, as it also sells most of the CPO produced by 113,000 Malaysian settlers on another 522,000 ha. FGVH also is the leading refined sugar producer in Malaysia and has interests in downstream processing in various countries around the world. Despite these impressive figures, investors buying FGVH shares will face significant environmental, social and governance risks, which are likely to create financial risks. Tension between the company’s ambitions and the Malaysian rural poor is rising because of alleged systemic undervaluation of oil palm fruits and the use of power politics to grab their land. The settlers owned 51% of a company which managed FELDA’s land, but FELDA signed a new lease contract with FGVH. While social unrest would cripple part of its operations, the prospectus does not disclose how the government assures that the settlers’ cooperative is going to be involved in the future of the company. The company does not demonstrate a strong sustainability record, with only 3% of its landbank RSPO certified. 50% of IPO proceeds will be used to develop plantations in vulnerable areas in Africa, Indonesia and elsewhere.

The company’s expansion plans are likely to trigger NGO protests and conflicts with local communities. Malaysia’s ruling political party, UMNO, controls the company management and lines up state-controlled investors to inflate share demand. Share prices can be expected to drop when this artificial demand dries up. Opposition parties favour redistributing FGVH’s landbank under the rural poor. With elections upcoming, changes in the political landscape may affect FGVH’s access to land and income streams.

Furthermore the suggested profitability of FGVH has to be questioned as palm fruit yields on FGVH plantations are below average and half of the plantations are in need of replanting. The planned replanting is too low, which means that either productivity will drop or more investments in replanting are needed. Both will influence the company’s bottom line.

After Facebook’s IPO in May, many investors complained that the underwriting syndicate (including Morgan Stanley and JP Morgan) had not revealed all relevant facts. The same two banks, together with Deutsche Bank, are involved in FGVH’s underwriting syndicate. And this prospectus also fails to provide some facts: details are missing on the environmental, social and governance risks of an investment in FGVH, including their possible financial implications. Meanwhile, the IPO itself is likely to create new risks, as there is widespread fear that the government’s proceeds of the IPO (€ 1.4 billion) will be used by UMNO to buy a favourable result in the upcoming general elections, further undermining Malaysia’s fragile democracy. For investors who expect sustainable returns on the short and middle term, FGVH’s IPO could become more disappointing than Facebook’s.

Jan Willem van Gelder is director of Profundo, the research and consultancy firm.