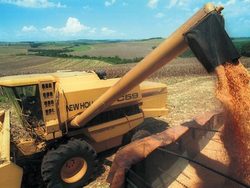 Brazil 6/13/12 – Commission of Agriculture has approved less restrictive proposal for farmland ownership by foreigners. According to a Deutsche Bank research note, the proposal maintains current restrictions for foreigners (25% of each municipality), but redefines the concept of foreign investor. Any company established in Brazil, even if controlled by foreigners, would be considered Brazilian, and not subject to the restrictions. Sovereign funds and nongovernmental organizations with resources from other countries would remain restricted in relation to land investments in Brazil. The proposed legislation must still be approved by other commissions at the congress, and then be voted at the full lower house level and finally at the senate level. Only then, if approved without further changes, would it be implemented. The process could take more than a year. Still, the proposal is a positive step towards a less restrictive scenario for the land market. Deutsche Bank notes this is positive news for SLC Agricola and Adecoagro. SLC benefits as one of the largest agricultural land players in Brazil. A less restrictive land market could increase the liquidity and value of their land portfolio. The new regulation could also clear the path for further growth in agricultural land purchases for Adeco, which is considered a foreign investor.