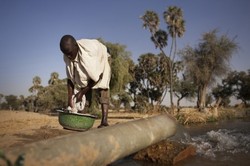 
The governments of Nigeria and Qatar are taking steps to further deepen their ties by looking at investment opportunities in the field of agriculture, water resources, infrastructure and mining, Nigeria's Minister of State for Agriculture and Rural Development Bukar Tijani Borno told Gulf Times yesterday.

"We have also had discussions with the Qatar General Electricity and Water Corporation (Kahramaa) on the possibilities of developing hydro power plants, which is necessary to power the dams needed for the irrigation system for the proposed agricultural plantations in Nigeria," the minister said, adding that they were also able to make initial contacts with some organisations concerning mining.Qatar and Nigeria are both members of the Organisation of Petroleum Exporting Countries (Opec) as well as the Organisation of Gas Producing and Exporting Nations.

Borno, along with the Minister of State for Works Bashir Yuguda and a businessman from the northern Nigerian state of Kaduna, Kashim B Shettima, were in Doha for an initial investment forum meeting with the main Qatari food importer, Hassad Food, to explore possible ways of co-operation in agricultural food production.
The areas of investments identified by the two countries include irrigation, agriculture, along the value chain of some commodities, particularly rice, sugar, wheat, possibly maize, sorghum, cassava, tomatoes and poultry. The official maintained that the present policy of Nigerian President Goodluck Ebele Jonathan is to allow the private sector, within and outside Nigeria, to drive the economy, especially in the agriculture and water sector, which accounts for over 40% of Nigeria's gross domestic product.
"We are here in Doha as a follow-up to the visit to Qatar by the vice president of Nigeria Alhaji Namadi Sambo, who was here to attend the Gas Summit recently hosted by Qatar. During that visit, he had discussions with HH the Emir Sheikh Hamad bin Khalifa al-Thani on having Qatari investments in Nigeria," he said.
He mentioned that a number of Qatari companies have shown interest in investing in Nigeria, notably Hassad Food and that the government of Nigeria has endorsed the Kaduna-based local company Barbedos Group, to facilitate local food production in Nigeria for exports to Qatar.
"During this meeting, we made a presentation about the irrigation dams development in Nigeria and the Barbedos Group also presented their profile and how they could partner with Hassad Food," the minister said.
However, he revealed that the Nigerian government will provide the right environment for the two partners as well as others that will be coming on board later, to meet and agree and then to set up their businesses for their benefit and for the people of Nigeria.
"The government is only encouraging private investors and can only give a broad list of what is available in Nigeria for potential foreign investors, so that they can make a choice and also create an enabling environment for the businesses to thrive," he claimed.
Hassad Food Operations and Asset Management executive director Andrew Goodman described the meeting as 'a precursor to their relationship with the Nigerian company."
"Hassad Food is a Qatari government company that is looking at development of food security for the country and also for the region. We have some strategic commodities that we are focusing on, which are in demand in this country and we have also found that many of those are available for production in Nigeria. We are interested in the opportunity of farming in Nigeria and we are happy that the government is facilitating that process," he explained.
He mentioned that the next stage for both partners was to formalise the agreement saying: "Once we have observed the due diligence, then at a certain stage, we will be visiting Nigeria to assess our partner's ability to deliver and we will also look out for opportunities to partner in other areas with other companies," he said.
When asked about his company's plan to ensure protection for such a huge foreign investment in Kaduna state, which has fallen victim to one of the incessant attacks by the Boko Haram group in a number of northern states, Shettima said: "If we are able to revive our agricultural sector, Boko Haram will disappear because I believe there would be enough jobs to do for those guys and all the unrest they are fomenting will totally stop."
Original source: Gulf Times
TWITTER
FACEBOOK
WHATSAPP
PRINT
E-MAIL
TWITTER
FACEBOOK
WHATSAPP
E-MAIL