High-level backing for Chinese investment in the Ord 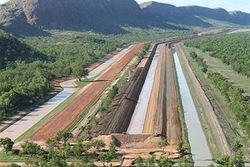 The Ord Irrigation Scheme in far north Western Australia. A number of Chinese investment groups have visited the region in the last six months.

Chinese investment in the Ord
Matt Brann reports from Kununurra, WA.
Download this mp3 file
The National Farmers Federation and the Federal Government are both hosing down fears about Chinese investment in Australian agriculture.
Trade Minister Craig Emerson says there's no reason a Chinese firm shouldn't be able to bid for land in the Ord River region in Western Australia.

And the chair of the NFF's economics commitee, John McKillop, says China will be investing in research and development in Australia, so it can increase its own food production.

"So not only would they need to buy every farm in Australia, they're going to need to buy most of Brazil as well, if their only response to food security is to buy foreign invested land," he said.

"Really, what the Chinese need to do is increase productivity on their own farms and that's what I think they'll get out of Australian agriculture.

"So they'll put capital in and they'll take knowledge back out.

"I think that's a win win for agriculture in Australia."

Download this mp3 file
A major business organisation says Chinese investment in Australia's agriculture shouldn't be seen as a threat, but rather a chance to build big and long-lasting projects.

The Federal Government is under pressure as it considers opening up land for farming in northern Australia as part of a deal to export food to China.

National President of the Australia China Business Council, Frank Tutor, says Chinese investment can help develop land which had previously been labelled too hard or too expensive.

"Australia has always had a current account deficit and it's what we have relied upon in the past to actually secure our standard of living," he said.

"So I think it's part of what we do when we look for these development and I don't think agriculture should be seen any differently.

"When it comes to agriculture specifically, I think (Chinese investment) is addressing a need within China, which is the need for food and securing food supplies into the future, so I think part of the equation is dealing with that basic need.

"I think from the Australian side, the (Chinese) investment should be seen in the context of, as was previously stated by Minister Brendon Grylls (WA Regional Development Minister), he said, where investment is coming in and actually helping the development of agricultural land, which might not otherwise be developed, then that's actually a good thing."

It was reported back in April that a Chinese investment group had launched a bid to buy the entire 15,000 hectares of the Ord Expansion Project in the Kimberley region of Western Australia.

Trading as Kimberley Agricultural Investments (KAI), it's understood the group is interested in developing a major sugar industry in the region, as well as a meatworks capable of processing 500,000 head of cattle a year.

It's since been revealed that Australia's largest beef company, the Australian Agricultural Company, has also launched a bid for land in the Ord, and CEO David Farley has told the ABC that there's no reason why an Australian company can't develop the land.

"There's no need for a Chinese investor to win this at all, Australia is more than capable of developing this asset (Ord Stage 2) itself," he said.

"We've got the skills base, we've got the intellect and more importantly we've got the capital base within the country to take this project on and deliver it to market."