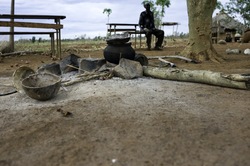 Major agricultural investor in Ethiopia, Saudi Star, has bigger problems there than it might have expected.

Negative publicity regarding Ethiopia’s aggressive drive to attract foreign investors into its agricultural sector has been relentless in recent years. The government is accused of brutally relocating communities to make way for the foreign investors, a charge it denies.

But now the local resentment has boiled over. In recent weeks there have been a number of reports of fatal armed attacks against Saudi Star. Ethiopian employees and Pakistan sub-contractors of the company are said to have been killed by groups thought to be opposed to the land give-aways, the government, or to both.

In a statement in response to what it said was the killing in late April by armed men of at least six Pakistanis and four Ethiopians, the Solidarity Movement for a New Ethiopia (SMNE) summarized the reasons for ill-will against Saudi Star and other big investors, and against the government.

The SMNE statement said the assailants attacked a group of workers being dropped off at their company residential compound at the end of the day, as well as the Pakistanis (‘‘allegedly agricultural experts hired by Saudi Star’’) working in the offices. The statement claims that soldiers guarding the site ran away rather than confronting the armed gunmen, and only returned later to pick up the dead and wounded. A few policemen who tried to resist the 15-minute attack were apparently overwhelmed, one of them also being killed, and the gunmen were able to escape.

Says the SMNE, ‘‘These deaths could have been prevented. Since 2009, we have been calling for transparency and inclusion of the local people in the decision-making surrounding the long term leasing of agricultural land in Ethiopia to foreign investors and regime cronies for next to nothing.”

It then goes on to mention human rights abuses many other reports and organizations have alleged are associated with the Ethiopian’ government’s relocations land leasing drive.

Getting to the crux of the matter, SMNE says, ‘‘Neither the Meles regime, Al Amoudi (the owner of Saudi Star) nor any other investor should expect there to be no reaction to these “takeovers” of land and water sources from the people whose ancestors have claimed this indigenous land for centuries. When they take away land and water, they take away the means to sustain life for the people. Some Anuak (the predominant ethnic group of the area in question) have said they now are waiting to die; others will fight. This should not come as a shock to anyone.’’

The presence of soldiers and policemen shows there was a realization of the potential for trouble. Other investors have almost boasted about the government’s protection of their farms, and the implied sense of security that provides. Yet the very need for these farms to also be armed camps, probably more so from now on than before, is a big part of the investors problem. If feelings against them are so strong that there are groups willing to go as far as to confront the government’s on-site security forces and to commit mass murder, this is a heightened element of investment risk. It needs going going back to the drawing board to think of how to relate to and engage with the locals, rather than merely more guns and more ruthless security measures.

Yet the latter is exactly what the SMNE fears. It says, ‘‘Indigenous people fear collective retaliation by security forces…(prime minister Zenawi) Meles will crack down on all the people. It is the blueprint of their regime and they have done it many times before. They will try to hunt down the rebels in the bush, but they will be hard to find so in their frustration and in order to teach a “collective lesson” they will target the local people.’’

The ‘rebels’ may have other long-standing grievances with the government, but the deep unpopularity of the ‘land grabs’ has given them a powerful, emotive new issue to champion. In an already volatile situation, a foreign investor who makes no effort to respect and engage with the local communities becomes a very easy target for pent-up frustrations. This is especially so when the locals are dispossessed and treated with contempt, when no significant local benefits from the investment are apparent, and when they become thought of as allies and enablers of central government authorities the locals may consider as a significant part of their woes.

It is not a good way for a foreign entity to start a long-term investment!

If they didn’t know it before, Saudi Star seems to be slowly waking up to the fact that they might have a problem that will not go away simply because they have the protection of the government.

A May 30 Bloomberg report, ‘Saudi Star Offers Jobs to Overcome Criticism of Ethiopia Project,’ says offering ‘jobs and training’ to locals will be a key part of how it counters opposition.

‘Jobs and training’ are almost always mentioned as some of the major benefits that will accrue to locals as part of the controversial new wave of farmland investments. The locals perhaps weren’t told about this in this case, didn’t believe it or haven’t seen them materialize since 2009,when Saudi Star’s rice project began.

But apart from that, it may be too late to easily appease the locals with promises of future ‘jobs and training.’ The importation of foreign ‘agricultural experts’ in the absence of accompanying training of locals will only have inflamed feelings even further. Local suspicions and resentments of investors and the central government are likely to be much higher and harder to overcome now than would have been the case if both parties had taken local sensibilities into account right from the conception and initial implementation stages of the project, rather than as an afterthought of an attempted public relations exercise three years later.

Besides, ‘jobs and training’ are not the only concerns now. They cannot compensate for the humiliation and resentment at alleged forcible relocations to make way for companies like Saudi Star. All over the world, governments often have to move people for reasons of what can be broadly considered the common or national good. But there is ample evidence from all over the world that there are right, good and effective ways to do it, and there also ways to do it that only cause many long and short term problems. These are the kind of big issues of ‘development’ that once poorly done cannot simply be corrected by offering some ‘jobs and training.’

According to the Bloomberg article, Saudi Star’s Chief Executive Officer Fikru Desalegn believes that ‘providing employment for residents of the Gambella will “definitely teach the public it is very useful for them,” Fikru said. Other benefits for the 13,000 residents of the area will include investment in infrastructure such as roads and vocational education by the company, he said.’

All this remains to be seen, not only in whether it materializes, but also in whether it will be sufficient to assuage the deep local grievances about the manner in which foreign investors have been suddenly thrust among them.

Meanwhile, ‘Work has resumed on the Saudi Star project and the federal police are guarding the area, Fikru said,’ Bloomberg tells us. “All the culprits were caught,” Fikru said. “Things are normalized. All our contractors are back to work.”

But are things really ‘‘normalized,’’ or are more soldiers and police simply going to cover up the many abnormalities for a while, until the next flare up of violence?

The style and manner of ‘land grabs’ or investments (take your pick) unfolding in Ethiopia has precedent in other parts of Africa, and indeed elsewhere. So much attention is paid to the potential benefits for investors and central government that little attention is paid to the sensibilities of communities. But land grabbing history in Africa and elsewhere has shown that these local communities, typically thought of as ‘backward’ and against outside efforts to ‘develop’ them, can get their comeuppance in unexpected ways, at a loss to all concerned.

It didn’t have to be this way. More humility and sensitivity to local concerns from the beginning by both the host government and sometimes just as arrogant investors could have resulted prevented some of the predictable but still alarming backlash against companies like Saudi Star.

In the recent land rush, it is astonishing how often it appears that otherwise smart people with millions of investment dollars at their disposal fail to ask some important basic questions before sinking their teeth into big projects.

It will be fascinating to watch how things develop with the Saudi Star and other investments in Ethiopia in the in the near and long term.