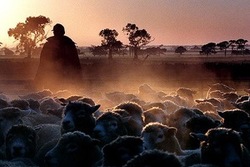 THE government's plans to make northern Australia into an Asian food bowl with the help of Chinese investment may run into trouble, after a new poll confirmed opposition to foreigners buying the farm.
The annual 2012 Lowy Institute poll found 81 per cent of Australians were against foreign firms buying Australian farmland. It was one of the strongest results recorded on any question the poll has asked in its short history, The Australian Financial Review reports.
It found 63 per cent were strongly opposed, 56 per cent believed the Gillard government was allowing too much Chinese investment in Australia and 54 per cent wanted food production to stay in Australian hands.
The annual snapshot of Australian attitudes to foreign and security policy was done in a phone poll of 1005 people between March 26 and April 10.
Lowy Institute of International Policy executive director Michael Wesley said the results reflected a "general anxiety among Australians about the volatility of the global economy and about the exposure of Australia's economy to global forces''.
Dr Wesley said it was the first time the survey had delved into foreign land ownership and any government intent on opening up an Asian food bowl should "take note of the strong reaction''.

AAP | 4 June 2012
It is up to state governments to decide whether to sell or lease their land to foreign investors, federal Regional Development Minister Simon Crean says.
Mr Crean was asked on Monday night's ABC program Q&A what the Gillard government was doing about a Chinese proposal to spend billions of dollars turning parts of the Northern Territory into a food bowl for China.
He said Australia was open to foreign investors and could be a big contributor to the world's food security.
Advertisement: Story continues below
But when pressed on whether the government would sell or lease large swathes of land for food production to the Chinese, Mr Crean said that was an issue for state governments.
"Some of it will be leased and some of it will be sold," he said.
Chinese investors have shown an interest in the vast Ord Two development zone in the Kimberley.
Mr Crean's coalition counterpart Barnaby Joyce was opposed to selling land "holus-bolus" to foreigners.
"It's not that I don't believe in foreign investment, but when you get it at economic choke points, such as ownership of a large dairy production factory or large swathes of agricultural land, then I have a serious problem with that."
Last week Senator Joyce urged the federal government to allow a local company to buy farming land in northern Australia ahead of Chinese interests, saying there should be policies in place to encourage Australian capital first.
He referred to Australian Agricultural Company boss David Farley who has said Australia is more than capable of developing the asset.