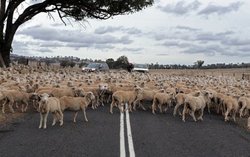 China would invest billions of dollars to transform vast tracts of undeveloped land in northern Australia for farming, under a plan confirmed yesterday by the federal government. (Photo: AFP/File, Torsten Blackwood)
by Lauren Quaintance

CHINA would invest billions of dollars to transform vast tracts of undeveloped land in northern Australia for farming, under a plan confirmed yesterday by the federal government.

But opponents said an ''Asia food bowl'' would come at the expense of giving Australians access to affordable, good-quality food.

Trade and Competitiveness Minister Craig Emerson confirmed that the government was undertaking a joint study with Beijing to examine the policy changes needed for a massive investment by Chinese agricultural interests.

Dr Emerson has denied that this means there are plans to ''buy up the farm'' and use imported labour to produce food for the voracious Chinese market, with its 1.3 billion citizens. ''It is designed to lift Australian food production for world markets,'' he said.

The revelation, in advance of an official report expected midyear, has caused some consternation in Canberra, where foreign ownership of Australian farmland is a hot-button issue.

Nationals senator Barnaby Joyce, who recently pushed for tougher restrictions on foreign ownership of land in a move that was seen as breaking ranks with the Liberals, said that the report would raise hackles in urban as well as regional areas across Australia.

''There is a strong concern in the Australian public about ownership of their farmland and it has a deeper philosophical vein to it than many other things,'' he said. ''It is not only a concern for regional people - it is reflected very, very strongly in urban constituencies.''

While the move by the Chinese was ''astute'', he said it exposed the lack of planning for our own food security since Australia was now a net importer of food and the resulting inflation had an impact on food prices.

''It's not that you'll run out of food, it's the form of food that you'll be able to buy, and that is happening right now. How often do you see people who in the past bought the roast, now buy mince? Why? Because they can't afford the roast, but that was once a staple.''

The question of selling Australian land to a foreign state-owned enterprise could also have troubling implications, according to Senator Joyce.

''It is held by an organ of the government, and governments, especially strong ones like the Chinese, don't go broke - therefore they can hold [the land] in perpetuity,'' he said.

Joyce denied his views were xenophobic. ''Look at any other country and see what their controls of [foreign] investment are like and then compare it to ours and you'll see you can't buy [land] in China, you can't buy it in Japan, you can't buy it in South Korea, you're struggling to buy in the United States and there are vastly greater controls with buying it in New Zealand.''

Liberal senator Bill Heffernan said Australians were either ''too bloody tired or too bloody lazy'' to develop the land to ensure our own future. ''I think it's time that all Australians sat up and took notice,'' he said.

While northern Australia has millions of hectares of underutilised land - as well as abundant water and good proximity to Asia - obstacles to development have included poor transport links and a difficult climate.

Until now, the Chinese have focused on opening up farmland in South America and Africa to meet the demands of the burgeoning Chinese middle class. They are expected to continue to focus on wheat and rice production on the mainland while looking for new sources to meet their increasing needs for beef, sheep, sugar and dairy.

It is the consumption of meat, in particular, that tells the story of the food needs of the world's most populous nation (see graphic).

More than a quarter of all meat produced worldwide is now eaten in China. In 1978, China's annual consumption of meat was 8 million tonnes - it is now 71 million tonnes and more than twice that of the United States.