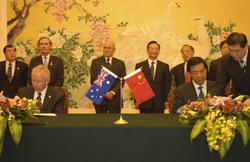 THE Chinese Government is seeking less scrutiny of its Australian farm raids.

Sources say the Chinese are pushing the issue as part of a planned free trade agreement with Australia.

The two countries have been negotiating an FTA for years.

But it's understood Chinese negotiators want preferential treatment of Chinese farm buys as part of the deal. This could see purchases of less than $1 billion face no scrutiny.

It could see scrutiny reduced on Chinese Government purchases as China aims to be treated the same way the US is on foreign investments.

"What sort of investment options is Australia being offered for Chinese land, resources and assets?" Dr Stone asked.

"We're on the taking end of offers. Australia never had deals anywhere as good as the best in the free trade arena. New Zealand already enjoyed freer access and cleaned up a lot of markets potentially ripe for Australia."

It was a concern to see "fair access to a market being manipulated", Dr Stone said.

"Australia is not equipped with current regulations and the tax system to deal with the huge tax avoidance occurring with foreign investors in Australia," Senator Heffernan said.

"Add to that the huge concessions made to encourage what was corporate foreign capital, which is now sovereign (foreign government) capital, and you can completely bypass the tax system.

"These are all problems Australia is not equipped to deal with and we need legislation reviewed."

A legal source familiar with negotiations with the Chinese said it was "absolutely" plausible China would try to get better access to buy farms here.

But another source involved in trade said he hadn't heard of the Chinese seeking less scrutiny of farm buys in the FTA negotiations.