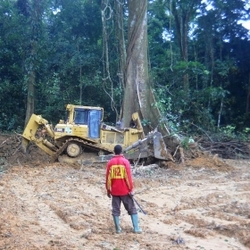 In the southwest region of Cameroon, within a beautiful rainforest, several Indigenous communities are working hard to make their voices heard. Their struggle began in 2011 when the government of Cameroon granted a vast land concession to SG Sustainable Oils, a subsidiary of the New York-based Herakles Farms. What the government overlooked, was that this concession occurred on the homelands of the Oroko, Bakossi, and Upper Bayang peoples in the Ndian, Koupé-Manengouba, and Manyu divisions of Cameroon. Herakles Farms plans to clear and replace 300 square miles of virgin rainforest with mono-culture trees to establish an oil palm plantation. This plantation will have major impacts on approximately 52,000 Indigenous peoples in 88 villages who are dependent on the forest for their livelihoods and way of life. The giant plantation will also fragment and isolate the region’s protected areas, including Korup National Park, Bakossi National Park, Banyang Mbo Wildlife sanctuary, Nta Ali Forest Reserve, and Rumpi Hills Forest Reserve. Despite the domestic laws of Cameroon that were implemented to protect rainforests from massive land leases, Herakles Farms has moved forward with the removal of the rainforest and the expansion of their oil palm nursery.

“After examining the issue critically, the Chiefs of Ngolo vehemently oppose and disapprove of the activities of SG Sustainable Oils Cameroon” -Ngolo Chief

The government’s concession to Herakles also affords the company power to arrest and detain anyone “trespassing” on their leased land. The power that the government has bestowed upon Herakles denies the Indigenous People of this region the right to free movement on ancestral lands as guaranteed to them in the Universal Declaration of Human Rights, the African Charter of Human and Peoples Rights, and by the International Covenant on Economic, Social and Cultural Rights, to which Cameroon is a signee.

The Indigenous Oroko, Bakossi, and Upper Bayang peoples are claiming their legal rights to free, prior and informed consent as enshrined in the UN Declaration on the Rights of Indigenous Peoples. They ask for the voice of the international community to join theirs in urging decision-makers at Herakles to listen.  It’s time for the private sector to respect Indigenous Peoples’ rights to free, prior and informed consent.

Let’s urge Herakles Farms to do this now!