The government is in the final stages of introducing a Land Authority whose duties, among others, will include dealing with land investments as well as establishment of a land bank and database. 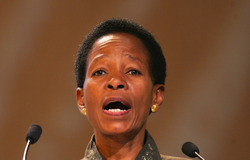 Tanzania's Minister for Land, Housing and Urban Settlements, Anna Tibaijuka, was formerly the head of the U.N.'s top settlements agency, UN-Habitat.
, told the 'Daily News' over the phone at the weekend that the new arrangement is in the offing and will be detailed to make sure that land resources are utilized properly and investments made.

She said that the authority will also be responsible for ensuring that people evicted from their land to give way to investments or government uses will be handsomely compensated, according to world standards unlike the present situation.

"We are also set to introduce new resettlement schemes where land bearers moving out their areas to give way to public uses will be compensated at world standard levels. This will prompt land owners to release their land readily when the land is needed -- instead of being forced to do so," she said.

Land compensation, according to the minister, will be administered through a newly established body called the Land Compensation Fund to be used for compensating people moved out of their land to give way to national development projects.

On the land investment by foreign firms she said value for invested land will be reviewed and investors will now be required to pay 25 per cent of the total land value to the government as opposed to the past.

The new arrangement, she said, will automatically phase out the current system whereby land investors are allowed to take the whole chunk and only pay some tiny amount of money as taxes to local authorities.

According to the minister, with the new arrangement popularly known as Land for Equity, 15 per cent of the land will be retained by the central government, five per cent will be passed over to the local government and another five per cent to individual farmers.

With the new authority, she noted that the government was equally underway to introduce auto growers' schemes where farmers will benefit more from technical and technological support from land developers and investors.

On the land bank, she said already 25,000 hectares have been surveyed in Bagamoyo District and will be one of the first land data to be kept in the new land bank.

Formerly all land investments and data base were handled through the Tanzania Investment Centre but little development potential in the area has been achieved.

The economic growth potential of investments in agricultural land has been questionable due to an inadequate regulatory framework governing foreign direct investments (FDI) in the sector.

The minister told the National Assembly last year that the introduction of the Land Bank would also enable people in the area to benefit from land resources and at the same time enhance sustainability of extensive land-based investments.

She said that under the new arrangement, villagers would have shares in the invested land but under invested value method of land valuation. She said a bill for the establishment of the bank would be tabled in the House after completion of necessary preparations.

The government is in the process of establishing an agency to manage resources associated with land and resolve related conflicts.

Speaking in an interview with the BBC yesterday, Lands, Housing and Human Settlements Development minister Prof Anna Tibaijuka said that the planned land corp. would be beneficial to the citizens as it would, among other things, help people in managing land ownership, give guidance in land compensation and help boost productivity.

Prof Tibaijuka added that the government would also introduce a system known as performance bond whereby any investor who acquires land would be required to contribute a certain amount of the produce or product to the government.

“The performance bond will be a challenge to those who will have the ability to own the land. For example, if a person applies for land for rice production and fails to produce..., the government will take the bond from them,” Prof Tibaijuka said.

However, she cautioned that municipal councils will not have the right to give title deeds to investors under the system, saying the only institution which has the mandate to do so is her ministry.

Prof Tibaijuka stressed: “We can’t give out the people’s land so simply, because if we do so we are going to have a nation whose people have no land. In so doing we can ensure peace to our nation through proper issuance of title deeds.”

The minister also said that under the new system, the government will also make sure that those who invest in land agree to give at least 25 percent of the project’s worthy profit to it.

She said that under the new arrangement known as land pro-equity system, the investor will not be allowed to own land permanently.

According to her, the government through the people will retain at least 25 percent of the allocated land, leaving the rest for production by the investor.

She added that, “through the newly introduced system, the government is also going to earn more benefits since agricultural production is a significant component in the country’s economy.”