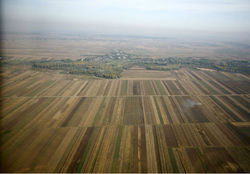 A much more aggressive investor than US-held Black Sea Agriculture has been Dutch-held Rabofarm, an investment fund held by Rabobank
Ziarul Financiar 05.18.2012

Jeffrey Notaro, a trader who worked on Wall Street for 18 years, where he traded both bonds and futures contracts, set up investment fund Black Sea Agriculture seven years ago, together with a partner from Bulgaria, mainly for investments in farmland in northern Bulgaria and south Romania.

The former broker also owns a business consulting company. Through this company, he managed to find some of the investors willing to put their money into buying farmland. So, at the end of 2011 the investment fund managed to raise $1 million (EUR0.79 million), with the help of whom he bought 113 hectares of farmland.

"Farmland in Romania and Bulgaria is significantly undervalued as opposed to the rest of Europe. Considering that land here is probably the most fertile on the entire continent, it is logical to predict that farmland in the Black Sea area will double considering that prices tend to converge with those in Central Europe," Jeffrey Notaro, CEO of Global Quest, which administers Black Sea Agriculture fund, told ZF.

Land prices on the local market are estimated by the US company at around EUR7,000 per ha.

At the same time, data of the investment fund shows that the same area costs up to six times more in the Netherlands, Germany and Belgium. The valuation at EUR7,000 of a hectare of land on the local market is surprising considering that those who sell farmland ask for up to EUR4,000/ha, according to online sales ads.

The US company also says it is investing here because the land in this area is the best in the world to grow wheat and other grains.

Romania has 8.3 million ha of arable land, which on the free market is worth around EUR16.6 billion, according to previous estimates.

The only statistic released at the end of last year by the Agriculture Ministry says foreign investors have come to control around 700,000 ha or 8.3% of the total.

Published in the newspaper: Ziarul Financiar The leading Romanian business newspaper. Being at the forefront of business journalism in Romania for the last 12 years, ZF unveils the significance of recent events in the economic arena and anticipates the changes that drive economy.  http://www.zfenglish.com/