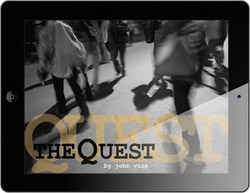 Magnum Photos member John Vink has released his Quest for Land project on the iPad, bringing more than 10 years worth of images to the device. He tells BJP why.

Quest for Land is "a comprehensive photoreportage about land issues in Cambodia over a time span of more than 10 years."

Shot by photojournalist and Magnum Photo member John Vink, the project looks at what is probably "the most important issue in this country recovering at a very fast pace from the Khmer Rouge era," says Vink. "That speedy recovery in an unbridled market economy highlights issues which are common to many developing countries."

But, when it came to publishing the work, Vink turned away from traditional publishers and decided to build his own iPad app.

The app, which is available from today, contains more than 700 images in 20 chapters, with slideshows, soundtracks and a series of essays written by former Phnom Penh Post editor and journalist Robert Carmichael.

Vink tells BJP why he chose the iPad for Quest for Land and how he went about creating it.

Read the rest at BJP