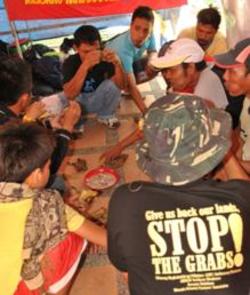 THE Kilusang Magbubukid ng Pilipinas (KMP) and the Asian Peasant Coalition (APC) lambasted Nakeen Corporation, a company that operates a palm oil plantation in Misamis Oriental, for spreading lies and deception during their press conference held on May 17, 2012.

Nakeen Corporation, a subsidiary of A. Brown Company Inc., is a company that operates an 11,350-hectare palm oil plantation in three villages of Opol town.

“We assert the veracity of our report based on actual interviews we had with the indigenous peoples’ in barangays Bagocboc and Tingalan during the International Fact Finding Mission (IFFM) held in Opol, Misamis Oriental,” said Antonio Flores, KMP national council member and a member of the IFFM team.

“We had a dialogue with the Department of Environment and Natural Resources (DENR) national office on May 9 and DENR officials said that the government agency has not issued any permit for A. Brown to operate in the said land, located in barangays Tingalan and Bagocboc,” remarked Rahmat Ajiguna, APC deputy secretary general and secretary general of the Aliansi Gerakan Reforma Agraria (AGRA) in Indonesia, a member of the IFFM team.

Thus, no company can enter the area without applying for a permit. Even if Paras, the latest of the local landlords who have been claiming the indigenous lands since the 1950s, entered into an agreement with the American company, “the permit granted was only for grazing and not the planting of palm oil,” according to Austria.”

Ajiguna stressed that “This contradicts the statement of Opol Mayor Dexter Yasay last May 8 to the IFFM team that A. Brown’s operations for the past two years is approved by the National Government. It also denies statement of Ms. Mary Sheila Mercurio, compliance manager of Nakeen Corporation, that when they entered those areas, they have the blessings of DENR.”

“This only confirms that it is A. Brown who is ‘squatting’ in our lands. It also shows that we are being treated like fools by our own government officials, who aid in the deception and divide-and-rule tactics of the company,” said Rubenson Batuto, vice-chairperson of Pangalasag, a local organization of tribal leaders.

The IFFM team reiterated their demands for the pull-out of A. Brown from Opol and the immediate return of the indigenous peoples to their ancestral land. They also called for the investigation of human rights violations of the Higaonons, including shooting and illegal arrest of farmers, burning of houses, uprooting of crops, harassment, and death threats. (See the findings at www.asianpeasant.org)

The IFFM team called on the Philippine government to stop land use conversion and implement genuine land reform. The team also calls for justice for the victims of human rights violations in Opol. (PR)

Published in the Sun.Star Cagayan de Oro newspaper on May 21, 2012.