Fred Pearce: Land grabbing has more of an impact on the world's poor than climate change 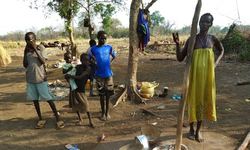 An Ethiopian family in the small town of Abobo in Gambella province. Fred Pearce visited the area as part of his investigation into land grabbing. Photograph: Jenny Vaughan/AFP/Getty Images

Fred Pearce: Land grabbing has more of an impact on the world's poor than climate change

The science and environment author discusses a growing global threat

What inspired you to write The Land Grabbers?

Over the last few years, I became aware of this hidden revolution taking place around the world: the buying up of vast swaths of land by foreign entities from beneath its occupiers. Soaring grain prices in 2007/2008 led to countries such as Saudi Arabia and South Korea worrying about their national food security and buying up overseas land. Then speculators and investors started piling in on the back of that. The net result is that poor farmers and cattle herders across the world are being thrown off their land. Land grabbing is having more of an impact on the lives of poor people than climate change. No one has put together the global picture of land grabbing so I wanted to take a closer look.

How much land has been grabbed?

No one really knows. A lot of reported deals never happen and a lot of the largest are done secretly. Oxfam says more than two million square kilometres in the last decade have been grabbed, two-thirds of them in Africa. That's like Spain, France, Britain, Italy and Germany put together.

Who's doing the grabbing?

A vast and colourful cast of characters: Gulf sheikhdoms, jumpy governments worried about food security, Chinese state corporations, Wall Street and City speculators, Russian oligarchs, Gaddafi's henchmen among many. Also some big conservation funds. Most likely your pension fund has a slice of the action too.

How did you research the book?

I'm an old-fashioned reporter – I want to go see. So I'd read about a big land deal in the papers and go to find what was going on. I travelled to 10 or so countries where the most egregious grabbing is taking place: the savannah of Brazil, the forests of Indonesia, the inner Niger delta of Mali.

Some governments bend over backwards for the grabbers…

If you drive into one region of Tanzania your mobile phone beeps with a text welcoming you to the United Arab Emirates. A major general in the UAE army has bought exclusive hunting rights to a 400,000-hectare national park there. There are stories of them using spotlights off vehicles at night to shoot leopards with AK47s and burning the bush to beat the game towards the guns. And the Tanzanian government's elite paramilitary unit keeps the Masai families off the land.

Wherever I went, people were being moved off with little or no regard for their historic or cultural rights. The grabbers want big spaces – 50,000 hectares – and you can only get that if you take commonly owned ancestral lands. They come in and put in an airstrip and a compound and roads and canals and the villagers are told to go to the nearest town and they lose absolutely everything.

You wrote the first popular book on climate change, Turning up the Heat, in 1989. How's that story going?

We have political consensus; the clean energy technology is there; it's in our interests environmentally and economically; smart corporations can make a profit from the change; and we have shown with the banking crisis that if there's a trillion dollar price-tag, we can pay it. But still nothing. If we can fix the banking system, then why not the climate system? It's governments that lack the balls.

What about the theory that what the west does is irrelevant, what with the eastern economies growing so rapidly?

Well, the Chinese have an environmental movement. There's huge concern about local pollution – smog, kids with high levels of lead from smelters, chronic poisoning and so on. It's like eastern Europe before the Berlin Wall came down – environmentalism was how political space was developed. It was the channel by which you could attack the political system. It wasn't directly attacking the state or the Communist party but it was a damn good way of coming in the side door.

In 2006, you wrote The Last Generation, a book about tipping points rapidly speeding up climate change.

There's huge concern about this. Historically, climate change does not happen in a gradual way, we have periods of stability and then a lurch. Over the last few years, we've been losing dramatically more Arctic sea ice in the summer than was predicted. There are concerns that the monsoons could switch off as a result of current changes in the Atlantic and that warming could cause methane to bubble out of the melting Siberian permafrost, which would then speed up warming even more. So things could get out of control much quicker than predictions suggest.

What makes a good science writer?

Some see themselves as part of the scientific priesthood, but you should be independent, like a political correspondent looking at politicians. This got me into trouble over "Climategate". There was some disturbing stuff in terms of people taking shortcuts, trying to ensure that rival scientists didn't get their stuff published, colluding against freedom of information requests. It didn't undermine the climate change science but it deserved the light of day. A lot of people didn't like me writing it up.

In Confessions of an Eco Sinner, you traced your own environmental footprint. Did you change lifestyle after that?

Not a great deal, I have to admit. My house leaks energy and in my work I fly a huge amount, which means my carbon footprint is sky high. My wife is still a better recycler than I am.

But the journey made you think as much about your social footprint as your environmental one?

It made me realise there's a kind of green imperialism where we are just screwing up a lot of lives for uncertain benefit and a sense of personal virtue. For example, the carbon footprint of flying green beans from Kenya is no greater than that of growing them in a hothouse in the Netherlands. And there is huge benefit attached to the farmer. How dare I decide that I want to penalise them to make myself feel a little bit better?

What's the least green thing a person can do?

Well, drinking Fiji Water, which has been shipped around the world from the South Pacific, doesn't make much sense. It rains here too.

Most of the stories you cover seem full of pessimism.

I'm interested in the life-support systems of the planet and they can be in peril without us knowing it. Take the ozone layer. Once scientists found that chlorine-based refrigerator chemicals were causing the problem we responded quickly and basically we only just caught it in time. Scientists say we might easily have used bromine-based chemicals in refrigerators instead, in which case we would have destroyed the ozone layer before we realised the problem.

Does all this keep you up at night?

No. You can plan for the future, but you can't predict it.