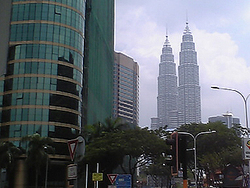 Felda Global manages palm oil and rubber estates for Federal Land Development Authority, a Malaysian government agency. It has more than 880,000 hectares of estates and has businesses in the U.S., Canada, Australia, China, Pakistan, Sri Lanka and South Africa

(Reuters) - Commodities group Louis Dreyfus has agreed to take a minority stake in Malaysian palm oil firm Felda, it said on Monday, adding that it was conditional on a successful June stock market float for Felda.

Felda Global Ventures Holding (FGVH) is preparing to sell shares in what promises to be the world's second-largest initial public share offering this year after Facebook.

"It (the memorandum of understanding) concerns an industrial partnership that could eventually lead to the acquisition of a stake in the capital of this company as part of its listing," Chairman Margarita Louis-Dreyfus said in an interview published on the website of French newspaper Les Echos on Monday.

Sources told Reuters last week that FGVH officials had invited Louis Dreyfus to take a 4.9 percent stake in the company ahead of the $3 billion initial public offering.

Louis Dreyfus said in a statement on Monday: "This strategic partnership is a major step in Louis Dreyfus Commodities' development in Asia and a unique opportunity to cement its role as one of the largest integrated players in palm oil activities."

The proposed transaction involves both a strategic cornerstone investment in the IPO and the creation of two joint ventures, Louis Dreyfus added.

Louis Dreyfus Commodities has its headquarters in Rotterdam, in the Netherlands.

Chairman Louis-Dreyfus also told Les Echos that the commodities group had launched on May 9 a process to list its Brazilian subsidiary, which mainly operates in the sugar and ethanol markets.

The group plans to invest a total of $7 billion over the next five years, partly financed by bonds, she added, reiterating comments made by Chief Executive Serge Schoen in an interview with the Financial Times published on Sunday.

(Reporting by Gus Trompiz and James Regan; Editing by Will Waterman, Greg Mahlich)