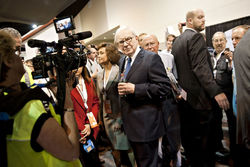 By Rita Nazareth and Katia Porzecanski

When it comes to acquisitions, Warren Buffett says his biggest deal is yet to come. That could attract the 81-year-old billionaire investor to companies from Deere & Co. (DE) to Henkel AG.

Buffett, Berkshire Hathaway Inc. (BRK/A)’s chief executive officer, said the $204 billion company he built with takeovers and stock picks will continue to grow and that his $34 billion purchase of Burlington Northern Santa Fe completed in 2010 “will not be the limit,” according to an interview with Bloomberg Television’s Betty Liu after Berkshire’s meeting with shareholders on May 5.

The world’s most successful investor is eyeing bigger acquisitions as Omaha, Nebraska-based Berkshire generates $1 billion a month in free cash flow, swelling the company’s cash pile to $37.8 billion. While Buffett said at the meeting that he recently passed on a $22 billion deal, Deere, the largest maker of agricultural equipment, and Henkel, the German maker of Loctite superglue, are among 24 companies similar to Burlington Northern in size that meet the takeover criteria in Berkshire’s annual report, according to data compiled by Bloomberg.

“Buffett’s problem is one we’d all like to have -- he has too much cash,” Todd Lowenstein, a Los Angeles-based fund manager for Highmark Capital Management Inc., which oversees $17 billion, said in a telephone interview. “He can’t afford just to do small deals.”

Deere and Henkel have “high quality assets, dominant market share, are pretty reasonably priced,” he said. “Those meet the characteristics he’s looking for.”

Buffett didn’t respond to an e-mailed request for comment sent to his assistant, Carrie Kizer.

“I wish I could make a big acquisition, because I love acquisitions when we’ve got the money,” Buffett told Bloomberg Television’s “In the Loop” program hosted by Liu. “Someday, $34 billion will not be the limit,” referring to his acquisition of Burlington Northern.

Buffett has used Berkshire’s cash pile to make at least one multi-billion dollar acquisition in each of the past two years.

He bought Wickliffe, Ohio-based Lubrizol Corp., the world’s largest producer of lubricant additives, in September for about $9 billion after saying in last year’s letter that “our elephant gun has been reloaded, and my trigger finger is itchy.” In February 2010, Buffett spent $26.5 billion in cash and stock for the 77.5 percent he didn’t already own in Fort Worth, Texas- based Burlington Northern.

The deal was Berkshire’s largest acquisition.

Buffett usually prefers “simple” businesses with pretax profit exceeding $75 million, “consistent” earning power and “good” returns on equity while employing little or no debt, according to his annual report.

He has shifted his takeover strategy as Berkshire has grown to focus on “capital intensive businesses” such as power producers and railroads, which require consistent investment in infrastructure and equipment. So-called value investors such as Buffett also purchase companies when their stock prices are low by historical standards compared with earnings.

Using acquisitions, Buffett has built Berkshire from a failing textile maker into a holding company with more than 70 units that produce energy and chocolate, operate planes and trains, and insure against car wrecks and earthquakes.

When Buffett says he is prepared to agree to a bigger takeover than Burlington Northern, there are two dozen companies that he would like based on data compiled by Bloomberg, including Deere and Henkel.

They have equity values of $20 billion to $40 billion; had capital expenses accounting for at least 10 percent of net fixed assets; generated an average increase in return on invested capital in the past five years that ranked in the top 50 percent; had the biggest increases in operating cash flow in that span; and sold for a lower price-earnings ratio than the average stock in their home market, data compiled by Bloomberg show.

Deere, valued at $32.2 billion, increased its return on invested capital, a measure of how profitably a company uses its debt and equity, by an average of 33 percent over the past five years, according to data compiled by Bloomberg. That’s the highest among U.S. industrial companies in the group and more than double the median return for the list, the data show.

The company also traded at 11.9 times its reported earnings yesterday, 36 percent lower than the average for U.S. equities, the data show. With analysts projecting net income will exceed $3 billion for the first time this year, Deere’s estimated price-earnings ratio will shrink to 10 times, a third less than its own five-year mean of 15.2 times, the data show.

Deere, which sold $24 billion of agricultural equipment last year, said in February that sales of its signature green and yellow farm, forestry and construction machines outside the U.S. and Canada will help boost revenue to $50 billion by 2018.

Buffett said yesterday that over the next 100 years, farmland will beat gold, which surged to a record in 2011 after increasing more than sixfold in the past decade.

With Deere, “the valuation metrics are Buffett-like,” Keith Wirtz, who oversees $15 billion as chief investment officer at Fifth Third Asset Management in Cincinnati, said in a telephone interview. “Traditionally, Buffett has been attracted to those entities that have strong brand identity.”

Deere is a company with “iconic brand identification.”

Ken Golden, a spokesman for Deere, didn’t immediately return a telephone call or e-mail seeking comment on whether the Moline, Illinois-based company has been approached by Buffett or would consider putting itself up for sale.

Henkel, which supplies glues for Airbus SAS’s A380 superjumbo plane, is the world’s biggest maker of adhesives and sealants with almost a 40 percent share globally, according to data compiled by Bloomberg.

The 21.7 billion euro ($28.3 billion) company, which is controlled by the Henkel family and based in Dusseldorf, could appeal to Buffett because its business is difficult to replicate and will profit as demand in the aerospace industry picks up, according to Peter Sorrentino, a fund manager who helps oversee $14.7 billion at Huntington Asset Advisors in Cincinnati.

Net new orders for commercial aircraft climbed to a four- year high of about $200 billion in 2011, according to data compiled by Bloomberg.

Henkel said in March that it is “confident” of reaching financial targets for 2012 and analysts now project its cash from operations will rise to a record on a per-share basis, the data show. In the past five years, the company’s average annual growth in operating cash flow was almost double the median for non-financial companies in the Stoxx Europe 600 Index. (SXXP)

While Henkel has since rallied to the highest price in at least two decades, the stock still sells for less relative to earnings than the average German company, which was valued at almost 20 times profit yesterday, the data show.

“That one would fit” Buffett’s criteria, Huntington Asset’s Sorrentino said in a telephone interview. “They are very unique. The aerospace cycle is really kicking in the high gear with commercial aircraft replacements.”

Cummins Inc. (CMI) would also be attractive to Buffett as a well- known brand with a foothold in some of the fastest-growing overseas markets and an easy-to-understand business, according to Walter Todd, who oversees $950 million as chief investment officer at Greenwood Capital in Greenwood, South Carolina.

The Columbus, Indiana-based maker of portable generators and diesel engines gets about 20 percent of sales from China, Brazil and India and will post record sales and earnings this year, analysts’ estimates compiled by Bloomberg show.

Cummins traded at 11.1 times earnings yesterday, a more than 40 percent discount to the average U.S. company, according to data compiled by Bloomberg. Analysts estimate that its operating cash flow this year will more than triple on a per- share basis from five years ago.

“You could say it’s pretty cheap,” Todd said in a telephone interview. Cummins has “very good exposure to world economic growth and other geographies overseas.”

Janet Williams, spokeswoman for Cummins, declined to comment on whether the $20.3 billion company has been approached by Buffett or would consider putting itself up for sale.

Bruce McCain, who helps oversee more than $20 billion as chief investment strategist at the private-banking unit of KeyCorp in Cleveland, says one risk that Buffett faces in doing bigger deals is the potential cost on Berkshire’s credit rating.

Berkshire lost its last remaining AAA credit rating in February 2010 with its cash-and-stock purchase of Burlington Northern, after Standard & Poor’s cut the company to AA+.

Buffett has also maintained Berkshire’s cash level at more than $20 billion to guarantee liquidity and told investors on May 5 the $22 billion deal that he stepped away from would have required Berkshire to sell securities he would prefer to keep.

To pay for a $30 billion deal entirely in cash and still have $20 billion remaining, Berkshire would have to add more than $12 billion to its current cash holdings.

“You’ve got to deal with the reality that the company is big enough that in order to do anything of significance in investing cash flow, they often have to do the mammoth deals that require moves that may be damaging shorter-term to the credit ratings or perhaps even the value of the stock,” KeyCorp’s McCain said in a telephone interview.

Smaller transactions may not do enough to benefit Berkshire investors. At the shareholders’ meeting, Buffett said his investments in Goldman Sachs Group Inc. (GS) and General Electric Co. (GE) in 2008, worth about $8 billion combined, were “peanuts.”

With Berkshire’s operations throwing off about $1 billion in cash after capital expenses, Buffett could still accumulate enough money in a year to consider an acquisition as large as his takeover of Burlington Northern, the data show.

“He has the cash,” said Tim Ghriskey, who oversees about $2 billion as chief investment officer of Solaris Group in Bedford Hills, New York. “If the opportunity is there, a larger acquisition can really impact Berkshire. Smaller acquisitions aren’t going to really move the needle.”