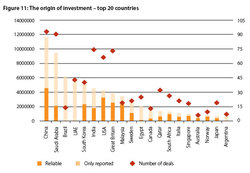 Saudi Arabia and the UAE are among the top four countries on a massive investment spree to acquire agricultural resources.

A new report by the LAND Matrix group - an amalgamation of global think-tanks - looks at how rich countries are scouring for land resources in poor but agricultural-rich countries.

The new(ish) investment class gathered pace after the 2007/08 spike in agricultural commodity prices.

And while such investments have earned a bad rep and often characterised as a "land grab", with rich countries "robbing" the poor, the report argues that the reality on the ground are much more complex.

"While some have seen a major threat to the rights and livelihoods of the rural poor in the Global South, others have pointed to potential opportunities arising from new investment in a long-neglected sector," the report noted. "The real extent and the nature of this new phenomenon have been hard to assess, particularly because of the lack of reliable data."

In that respect, the report is ground breaking on many levels as it looked at more than 1,200 agricultural land deals since 2000, covering an area of 83.2 million hectares, or equivalent to 1.7% of the world's agricultural area - that's roughly half the size of Western Europe.

The phenomenon of global land deals gathered momentum since 2005 and reached its peak in 2009, but has slowed down somewhat due to the global financial crisis and an easing of agricultural commodity prices.

Nevertheless, the indicators show the trend turning upwards once more.

"Data is suggestive of a long-term trend of growing commercial interest in land, somewhat masked by a possible newfound wariness (since 2009) about attempting very large-scale land deals, or publicizing those under negotiation," the report noted.

The report echoes the trends emphasised by a World Bank report, published late last year, which highlighted the growing trend and its impact on target and investing countries.

The World Bank study noted that the expansion of cultivated area is unlikely to slow, driven by population growth, rising incomes, and urbanization will continue to drive demand growth for some food products, especially oilseed and livestock, and related demands for feed and industrial products.

"A conservative estimate is that, in developing countries, 6 million ha of additional land will be brought into production each year to 2030. Two-thirds of this expansion will be in Sub-Saharan Africa and Latin America, where potential farmland is most plentiful," authors Klaus Deininger and Derek Byerlee said in the report.

While the bank believes agricultural land investment can be abused, if done right they can be a source of job creation, especially if small farmers are included in the decision-making process and land reforms enable a transparent and fair process.

GULF ACQUISITIONS
Saudi Arabia, the UAE and Qatar are among the leading investors in agricultural lands. The reasons are obvious: their substantial wealth is combined with their lack of domestic arable land, hence the desire to pursue food supplies and resources that can ensure some kind of security over the long-term.

The Land Matrix data shows that the United Arab Emirates alone has acquired 15.3 million ha in the past ten years. However, only 14% of these deals have led to projects that have begun implementation so far.

"According to the Land Matrix data, investors from Gulf states have acquired land mainly in Africa (113 deals) and South East Asia (53 deals)," the report notes. "Gulf states investors tend to target locations where there is some cultural and religious affinity, such as Northern Africa and the Horn of Africa, as well as Asian countries with Muslim populations (Pakistan, the Philippines and Indonesia). In some cases, investors from these countries have invested in developed countries (e.g. Qatari investments in Australia)."

While the UAE and Qatari governments have taken a key role in acquiring agricultural land - in Saudi Arabia the situation is different as private companies have taken the lead in acquiring land.

Savola Group and Tabuk Agricultural Development Corp. have been active buyers, especially in places like Philippines to secure cheaper and abundant supplies of agricultural produce.

Demand for food is an important driver for Middle East investors who are most interested in food crop production with a total of 100 reported projects of which 26 have been implemented.

"Investments in food crop production represent 66% of the demand for farming land by investors from Middle East, the report notes. "The Land Matrix data seems to confirm the theory that governments or investment funds linked to public authorities from Middle East countries have seen this type of investment as a way of diminishing their dependency on the world food market. Egypt, as a Northern African country, follows the same strategy."

"Demand for food is not the only driver of the land rush, and it is not only about food security and a response to high food prices. It appears to be driven by a range of factors, all ultimately linked to rising levels of consumption by at least part of the world's growing population, in the context of finite natural resources and ecosystem services."

Land Matrix data shows that countries with the highest water scarcity, such as Saudi Arabia, UAE and Qatar, would heavily strain their water resources if they were to divert their global agricultural purchases to their own countries.

However, while Saudi Arabia and Qatar appear to be acquiring to meet local demand, the UAE's acquisitions appear to exceed local consumption trends.

While the United Arab Emirates has a similarly high water scarcity index [to Qatar and Saudi Arabia], the average water consumption per hectare of the deals made by its investors is almost twice that of its domestic water consumption (1.71). This is a possible indicator for at least a partial world market orientation."

Clearly, Africa is the favourite hunting ground for not just for Gulf states but other global investors as well.

Within Africa Sudan, Mozambique, Tanzania, Ethiopia and Zambia are among the most prized destinations for agricultural purchases.

While there is a perception that rich countries are exploiting the poor at the expense of local farming communities, Land Matrix data suggest that only 30% of the land bought was actively-produced tract of agricultural land.

The Land Matrix coalition admits that they are dealing with imperfect data with much of the deals not being publicised by the target and investing countries.

'SECRET' DEALS
A separate report by the International Land Coalition and the Oakland Institute notes that the investment class suffers from "secrecy."

"The rush for land in developing countries has rapidly intensified since 2008, but the sector remains largely unregulated," the report noted. "Concerns are growing over the impact of big, secretive deals between governments and investors on communities and the environment. As more and more land is taken away from local communities, growing numbers of people are losing access to the resources they have relied on for generations, and ecosystems are being destroyed."

While greater transparency will help local comunitites, it will also help investors benefit from a level playing field as well as reduced risks of corruption and expensive and damaging conflicts with communities, greater transparency would enable governments to make more informed decisions and negotiate better deals when allocating commercial rights to land, said Frederic Mousseau Policy Director at the Oakland Institute.

Agricultural investment is increasingly become an important asset class not just for the Gulf states, but also the BRIC nations and other emerging markets that can see their domestic food supplies insufficient for their growing population.

Given that 75% of the world's poor rich live in rural areas and are mostly involved in agriculture, it is also a great opportunity for poor resource-rich nations to attract foreign investment - but it should not come at the expense of local communities.