Foreign investment in the time of the telegram 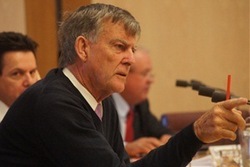 “If we allow foreign companies that have smart accountants with connections to the Cayman Islands or the Virgin Islands and have financial facilities which in some cases are interest free, from a sovereign find, and the purpose of the company is to acquire productive capacity to secure the nation’s interests, as opposed to getting a return on their money, we will lose control of our own destiny," says Senator Bill Heffernan.

AUSTRALIA’S foreign investments legislation was written when the telegram was a mainstream communication tool and needs a radical overhaul driven by an updated understanding of sovereign risk and national interest, with a strategic view, according to NSW Liberal Senator Bill Heffernan.

The national interest test which accompanies the FIRB review is pivotal to the debate but he says its relevance is largely being ignored in recent public commentary.

He believes the national interest test is virtually non existent but a revision of the rules must adequately consider the changing nature of national sovereignty, in the face of a mounting global food security task, when deciding on foreign acquisitions.

Senator Heffernan says foreign ownership that allows food to be produced in Australia, and exported back to the country of ownership therefore bypassing local markets and financial transactions, could also create associated tax implications not yet properly considered by government authorities.

Senator Heffernan believes the foreign ownership issue has also become overly politicised and criticised members of the Coalition and the Labor government for their lack of understanding of the issue amid political posturing.

He says major media outlets and high level government bureaucrats are also missing the point by only focussing on the FIRB’s basic threshold number.

“I’m sick of hearing what the threshold should be,” he said.

“Sovereignty as we know it will not be the same in 40 or 50 years time, unless we do something about it.

“But I’m not reading about these things anywhere.

“The national interest test does not exist right now and is really just a political convenience.

“I have no objection to foreign ownership as long as they participate in the local market and pay taxes and it doesn’t threaten our national sovereignty.

“But we have to look at the long term market implications and see through the clever accounting cover ups.

“I’m prepared to have a crack at everybody on this.

“The Foreign Takeovers Act needs to be re-drawn and in doing so the national interest test should answer these questions - where are we at now; where are we going to; and do we want to go there?”

Senator Heffernan is Chair of a Senate Rural and Regional Affairs Committee inquiry which has investigated the vexed foreign investment issue over the past year and is due to report on June 27.

He said the inquiry had gathered strong evidence suggesting the Foreign Takeovers Act needed a major overhaul with a renewed national interest test that accommodated a modern definition of sovereign ownership and risks.

In upcoming hearings, the inquiry will take fresh evidence from new witnesses, seeking to understand how other countries like the US and Brazil handle foreign investments and how their rules link into a longer-term strategy.

Senator Heffernan said he questioned Tax Department officials during the course of the inquiry but was unable to obtain a reasonable explanation on how they treated a sovereign nation - under the current Foreign Takeovers Act or the Taxation Act - that acquired Australia’s sovereign assets and then warehoused the production from those assets and transferred that stock to their warehouses overseas.

“Where would the tax come in if no money changes hands?” he asked.

“It’s the same as if I transferred my wheat from one silo to another on my farm - if I was a foreign investor who grew wheat here and then sent it to my silos overseas or put it into my feedlots overseas.

“How do you reliably estimate the tax on that?

“The tax office didn’t even think about those issues and probably don’t even understand them.

“You have the risk of bypassing the tax system so they don’t contribute to our long term income and there’s a big risk of this growing in time.”

Senator Heffernan said in discussions with former AFP Commission Mick Keelty he was alerted to how human displacement would affect the changing concept of sovereignty over time.

He once believed sovereignty was about defending your country and its borders and making sure the army, navy and military alliances were in place to do that.

But he no longer sees it that way.

“Some people will say, ‘ah say he’s a lunatic, he’s xenophobic or he’s a Hansonite’ but I’m not - it’s just about facing the facts,” he said.

“If you allow unfettered access to a foreign country with a virtually unlimited cheque book to acquire your country’s assets and they don’t participate - by smart accounting or whatever - in your tax system and they don’t participate in the tension in your supply and market demand because they are bypassing your local market, which other countries like China and India have indicated they want to do, you’ve got a real problem and we need to deal with that.

“For all intents and purposes the FIRB rules are non existent and the rules are left over from the telegram days.

“Smart countries and smart accountants will get around the system so we’re a soft entry point and we’ve got to think about those regulations.”

As the Coalition dithers with its foreign investment policy development process, reports have emerged on recent in-fighting between the Liberals.

Liberals like South Australian MP Jamie Briggs believe the FIRB’s threshold should remain unchanged from its current mark and are wary of implementing or changing existing regulations for fear of discouraging potential investors.

But others like Senator Heffernan and Victorian Liberal MP Dan Tehan believe stronger legislative protection is needed and information and understanding around foreign investment policy setting.

The party aims to release an agreed position subsequent to a committee process, Chaired by Nationals Leader Warren Truss, that started last June.

At the time they promised to release a policy position in coming months but are now waiting for Senator Heffernan’s inquiry to conclude which is drilling down into greater details of foreign ownership by sovereign entities with links to State banking enterprises.

But Senator Heffernan said too many politicians were more concerned about their political futures and wanted to adopt a political “look” on the foreign investment issue ahead of next year’s Federal election, rather than supporting a robust national interest test.

He said a robust national interest test must consider foreign investments, while understanding the implications and opportunities for Australia of the global food task over the next 40 to 50 years, with the world population forecast to expand from 7 billion people now to 9.1 billion in 2050, according to UN figures, but more food must be produced to feed the planet with less arable land and water resources.

“This is not about stopping foreign corporate money it’s about understanding the difference between ownership through foreign sovereign money or another nation acquiring your sovereign assets,” he said.

“If you’re a country that’s thinking about where you’re going to be in 40 or 50 years time, which some of the major ones are, and you’re not looking for a return on your investment as much as you are looking for certainty of supply by acquiring the means of production, then you’re prepared to pay a hell of a lot more than what the market is offering.

“Now that’s been demonstrated here already with coal mining buying farms for four or five times the market value because they don’t want the productive capacity to farm, they just want to shut the farmer up so they can do the mining.

“Countries like China and India are acquiring the land and assets here in Australia but they are not looking for a return on their money.

“They want to secure their future food production and that can distort the market price for land here.

“This is a serious issue which most politicians would not know shit from clay about and don’t want to know because they just want to get past the next election.

“But I’m looking at where Australia is going to be and what sovereignty is going to mean in another 40 or 50 years time.”

He said none of the proposals hit the $244 million threshold and “there are no touch and feel guidelines”.

“The test now is, ‘is there any risk in this for the minister or the government?’ and they ask five or six interested parties and if they have no issues they give it a tick,” he said.

“These things are not sexy and they should not be political.

“But too many people in the debate are only thinking about how they can get a political edge or a political definition.

“I’m only prepared to deal with the facts and that is, if you allow other sovereign nations unfettered access with a cheque book to acquire your assets and then they deny you access to the production from those assets, it changes the game.

“I’ve had a yarn to (Trade Minister) Craig Emerson about this issue and would like to think he did not put me in the Hanson-ite, xenophobic league because he understood these are serious, serious issues and I’m afraid we’re not addressing them.

“The global food task is an enormous thing.

“By 2050 it’s predicted that two thirds of the world’s population will live in Asia and they will have lost 30 percent of their productive capacity.

“They are obviously planning for that future but we’re not.

“There are too many unregulated issues.

“I’m afraid you can’t blame the farmer getting out who gets four or five times the value of their farm.

“But the national interest test ought to say, ‘where’s this going to take us?’ and find out what’s happening now because we simply don’t know.

“Australia has to work out where we are; model where it’s going to take us in the future; and decide if we want to go there.

“And that will include a new definition of sovereignty.

“And that is not me being xenophobic; it’s just facing the facts.

“If we allow foreign companies that have smart accountants with connections to the Cayman Islands or the Virgin Islands and have financial facilities which in some cases are interest free, from a sovereign find, and the purpose of the company is to acquire productive capacity to secure the nation’s interests, as opposed to getting a return on their money, we will lose control of our own destiny.

“I think it’s quite a serious issue but a whole lot of dry thinkers are saying let the market flow.”