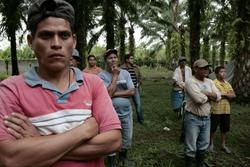 Peasants from the Bajo Aguán valley, Honduras, which is witnessing an alarming situation of violence and repression against peasant communities. On April 17, 2012, the International Day of Peasant Struggle, Honduran peasants started massive land occupations, with about 3000 farm families occupying more than 12,000 ha in at least six departments.  (Photo: CC HondurasBlog via Flickr)

The World Bank is playing a leading role in a global land grab, says farmers' movement and its international allies.(1) The World Bank’s policies for land privatisation and concentration, have paved the way for corporations from Wall Street to Singapore to take upwards of 80 million hectares of land from rural communities across the world in the past few years, they say in a collective statement released today at the opening of the World Bank’s Conference on Land and Poverty in Washington DC.

"Rural people are losing control over land and water because of this global land grab," says Honduran farmer leader Rafael Alegria of the international farmers' movement La Via Campesina. "We want the land grab stopped and the lands taken to be returned to the local communities. In Honduras, we demand that the law for rural modernisation promoted by the World Bank be canceled and that a new law for agricultural transition be adopted".

The World Bank will be meeting with government officials and private sector investors during its annual conference, where they will discuss large-scale farmland acquisitions by foreign corporations in developing countries. The World Bank will be promoting its controversial Principles for Responsible Agricultural Investment (RAI).

"The World Bank's RAI principles are an attempt to legitimise corporate land grabs and the expansion of an industrial model of agriculture that is destroying people’s livelihoods and the planet," says Giulia Franchi of Campagna per la Riforma della Banca Mondiale. "Decades of World Bank programmes promoting market-based approaches to land management have set the stage for a massive takeover of peoples' lands, massive environmental destruction, and a massive backlash by farmers and other frontline communities."

The global land grab was denounced at over 250 worldwide protest actions on April 17th, the International Day of Peasant's Struggle. Tomorrow another major farmland investor conference in New York City involving the World Bank and big money managers like the Canadian Pension Fund, TIAA-CREF and PensionDanmark, will be targeted for protests by New York’s Ethiopian Community, Occupy Wall Street and others.(2)

"U.S. farmers, particularly young and beginning farmers, can't afford the rising costs of good land and are in no position to compete with speculators and Wall Street investment schemes,” says Bob St.Peter, Director of Food for Maine's Future and Executive Committee member of the National Family Farm Coalition. “Here in the U.S., 400 million acres of farmland are going to change hands over the next 20 years. Whether those lands will support diversified family farms or multi-national corporations is one of the most important political questions in the U.S. today."

The National Family Farm Coalition and international allies will hold a media teleconference from Washington, DC on Monday, April 23rd at 11:00 am EDT.

**To participate in person, please join us at 110 Maryland Ave., NE, Suite 108; Washington, DC 20002, National Council of Churches Conference Room
--------
(1) Signatories to the statement are Campagna per la Riforma della Banca Mondiale, FIAN International, Focus on the Global South, Friends of the Earth International, GRAIN, La Via Campesina, and the Transnational Institute.


"Land governance in a rapidly changing environment" is the theme of the 2012 World Bank Conference on Land and Poverty being held April 23-26 in Washington DC. Corporate investors, governments and International Financial Institutions are meeting at World Bank headquarters to “discuss issues of concern to land practitioners and policymakers worldwide”. While they devise ways to help corporations acquire land around the world, people on the ground are suffering from the corporate-friendly land policies and laws promoted by the World Bank and its allies.


The World Bank has for decades pushed a market-based approach to land management based on its political and economic recipes for poverty reduction. It has promoted land privatisation and sought to create the conditions for land markets to be established by transforming traditional and customary land rights into ready-to-be-marketed titles and by funding land-titling programs in many countries -- in support of a corporate-led agri-industrial model of development.


Its land programmes have increased the concentration of land in the hands of a few and set the stage for a massive global land and water grab. Attracted by high food prices and an increasing demand for agrofuels, feed, and raw materials, multinational agribusiness corporations and players from the financial industry, such as private banks and pension funds, are rushing to gain control of land and other associated resources such as water. An estimated 80 to 230 million hectares of land have been leased or bought up in recent years, mainly to produce food, feed or fuel for the international market. As a result, peasants, herders, fishers and rural households are losing their access to and control over natural resources (land, water, fisheries, forests, pastures) and production processes, and therefore being dispossessed of the means to feed themselves and their communities. Local populations are being evicted and displaced, human rights such as the right to food and housing are being violated, and the environment, as much as traditional community structures, are being destroyed.


The World Bank is playing a key role in this global land grab by making capital and guarantees available for big multinational investors, providing technical assistance and support to “improve the agricultural  investment climate” in so-called recipient countries, and promoting policies and laws that are corporate-oriented rather than people-centred. All this is being done while the Bank promotes its seven principles of Responsible Agricultural Investment (RAI) to legitimise the global capture of people’s lands by big corporate investors for industrial agriculture. The World Bank continues acting in total impunity. States must stop it and fully comply with their extraterritorial human rights obligations.


While the World Bank meets inside its headquarters with the global land grabbers, people outside are mobilizing around the world to outlaw land grabbing and to reclaim all the grabbed territories. They assert that no corporate-led transparency or responsibility schemes will ever make the expropriation of people’s land or the agri-industrial model acceptable or sustainable.


In the framework of the International Day of Peasant Struggle launched by La Via Campesina for April 17, we join with farmers and fisher-folk movements, agricultural workers’ organisations, students, human rights activists and environmental groups, women’s organisations and social justice movements in the struggle to oppose land grabbing and the corporate control of lands and to stop any attempts by the World Bank and its corporate allies to package the expropriation of peasant farmers’ land worldwide as a responsible deal.


World Bank, get out of land, now!