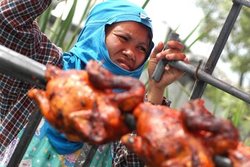 A woman sells roast chickens on the pavement of a freeway in Thailand. The Thai food industry is investing, on a much bigger scale, in Australian meat, fish and grains.

Listen to the complete interview with CP Group's Richard Lovell

A Thai food company plans to invest hundreds of millions of dollars in Australian food and processing in the next five years.

CP Group has supermarkets and poultry and fish farms in Thailand, as well as producing ready meals.

The company has opened an office in Melbourne to start buying red meat and grains and set up a salmon farm in Australia.

General manager of CP Group, Richard Lovell, says the plan is to spend $100 million this year on Australian produce and recruiting staff.

"It's really something that develops in the next three to five years."