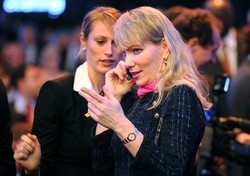 
MOSCOW, RUSSIA — Sistema JSFC, the largest diversified public financial corporation in Russia and the CIS, announced on April 4 that along with RZ Agro Ltd., it is establishing an agricultural joint venture to be named RZ Agro Holding Ltd.

RZ Agro Ltd. was created in 2009 and is affiliated with the Sierentz Group, both controlled by members of the Louis-Dreyfus family.

Upon completion of certain conditions in 2013, Sistema will own 50% of the venture, with possible adjustments to the valuation of the transaction based on achievement of performance measures.

Completion of the transaction is subject to the satisfaction of certain conditions, including execution of additional agreements and receipt of approval from the Federal Antimonopoly Service, and is expected to occur in the second quarter of 2012.

Mikhail Shamolin, the president and chief executive officer of Sistema, said, “The strategy of the joint venture is to expand its agricultural assets through organic growth and strategic acquisitions, and to create a leading agricultural company in Russia. The joint venture will analyze acquisition opportunities in the key production regions of Southern Russia and Central Chernozem with a view to creating efficient clusters with access to domestic and export markets. We are optimistic about the opportunities arising out of cooperation with our partner, who is bringing its industrial farming and managerial expertise to the joint venture.”

“We are firm believers in the success of RZ Agro Holding”, said Gérard Louis-Dreyfus and Peter Mann, the representatives of the family shareholders of RZ Agro Ltd. “As the grains sector in Russia has tremendous potential due to its low production costs and geographical position in a world of ever-growing population and rising standards of living.”

“Our ability to consolidate prime agricultural land into regional clusters, and achieve cost-effective production through a combination of a transparent corporate structure, lean and professional organization, and selective investments into modern equipment and technologies will be significantly enhanced with the creation of this joint venture,” said Stéphane Mac Farlane, chief executive officer of Russkaya Zemlya LLC.