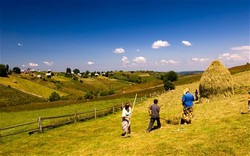 Currently foreigners are obliged to buy farm land through locally registered companies. But the restriction has not prevented such investors from acquiring 700,000 hectares of land, approximately 8 percent of Romania's total arable area.

Setting up a land bank with priority in the acquisition of agricultural land could stop the flow of foreign investments in local farmland, said Fuia.

“We want to set up a land bank with preemption rights to purchase agricultural land. It is the only way to keep it in the national sphere. The institution will be allowed to purchase land from the market to merge it, then put it back on the market by concession for young people,” said the minister. He announced that Romania has “almost zero chance” to limit foreign purchases of land in any way as such a move would change the EU accession treaty.

Romania agreed in 2007 – when it joined the EU – to liberalize the land market from 2014. From then on foreigners interested in Romanian land will have no barrier; they are currently obliged to buy land through locally registered companies.

But the restriction has not prevented such investors from acquiring 700,000 hectares of land, approximately 8 percent of total arable area. In this context Fuia revived the idea of a land bank, an instrument placed on standby by the former minister, Valeriu Tabara.

The idea has never before got past the discussion stage and Fuia’s efforts have proved no exception. The minister did not come up with concrete data in this regard. Asked what funds are necessary to establish a land bank and the source of this money, Fuia did not provide a clear answer. “It’s a work in progress. When we have clear data we will let you know,” he responded.

Last year, when Tabara came up with a similar initiative, the proposal was that the Agency of State Domains (ADS) be transformed into a land bank by introducing a provision to allow the institution to acquire agricultural land. ADS is now responsible for the privatization of state farms and agricultural land concessions held by these companies. One of the institution’s responsibilities is to merge land to lease or sell it later. ADS currently has about 340,000 hectares of farmland, of which the largest areas are in Braila (69,000 ha), Calarasi (52,000 ha), Dolj (20,000 ha), Constanta (18,500 ha) and Giurgiu (18,000 ha). ...(excerpt)