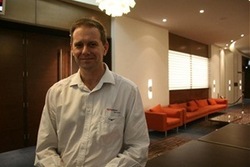 State Westpac Agribusiness head of grain Chris Moore believes there is a level of complacency in terms of foreign investment in agriculture in Australia.

WITH foreign investment in agriculture already occurring in Australia, many within the agricultural industry believe we need to be wary.

Westpac Agribusiness head of grain WA Chris Moore is one of those people and believes there is a level of complacency in terms of foreign investment in Agriculture, particularly as it relates to food security.

"We need to know how far is enough, otherwise Australian consumers may be at the mercy of someone else," he said.

"If I was china and I'm looking at 50 years of food security, I buy farmlands today for 50 years from now and that may not be produce that we have access to in 50 years' time.

"Now if were ok with that, then that's great but it's certainly a question that needs to be asked."

Mr Moore said that although the government's foreign investment rules had been well established around mining, with very clear projects and infrastructure, the same focus hasn't been applies to food production in Australia.

"This is because the majority of food production in Australia has traditionally come from family farms, all be it large ones in today's market," he said.

Mr Moore acknowledged that when it gets down to the individual farmer who wants to sell their farm, and a foreign investor is prepared to buy and there is no one else in the market, you have to support that individual's right to sell to whoever they choose.

However at a more global level and from a community level Mr Moore said Australia has to decide what level of investment we want.

"Foreign investment is welcome and certainly somewhat needed but the question must be asked how far are we willing to go, and no one is really asking those questions," he said.

Using the mining industry as an example, Mr Moore pointed out that the majority of those projects wouldn't happen without foreign investment and said they were well created.

Do you allow 100 pc of the mining industry to be owned over seas? of course you don't," he said.

"We in agriculture are at the very early stage of this same question."

While a Senate inquiry into the issues surrounding foreign investment has been conducted, many farmers have been left wanting clarity on what the actual findings are.

Williams's farmer Noel Fowler is one of these people and agreed with Mr Moore's comments that further discussion surrounding foreign investment was needed.

Mr Fowler said he saw the benefits of foreign investment, and believed having other countries involved in agriculture in Australia could bring new ideas and ways of farming, but said was concerned as to what level of agricultural land in Australia was allowed to be foreign owned and operated.