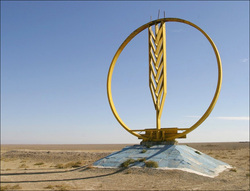 The Financial Times reports that KazExportAstyk controls 1m hectares of agricultural land – an area about the same size as Denmark. Ruslan Moldabekov, KazExportAstyk’s founder and majority shareholder, has set a goal for the company to produce 1 per cent of global grain output and is looking for foreign investors to support development of grain export infrastructure (FT, March 29).

As global grain prices continue to climb, the EBRD is charting new territory by becoming the first international financial institution to invest directly in a primary agricultural company in Kazakhstan.

According to the European Bank for Reconstruction and Development, in the week when European wheat prices hit a 9-month high, the EBRD has reaffirmed its commitment to food security in the region with a US$ 45 million equity investment in KazExportAstyk, a company well-positioned to expand its production of grain.

JSC Holding KazExportAstyk – or KEA – is a large agro-industrial holding, the third largest grain producer and the biggest oil seed producer in the Central Asian republic. It is fully integrated with its own grain terminals, flour mills and long-term land usage agreements. Among the grain enterprises in the country, KEA has complied with international audit standards for the longest period of time.

The EBRD’s investment will consist of an equity investment via subscription to newly-issued share capital of KEA worth US$ 45 million. The proceeds of the investment will allow KEA to strengthen its balance sheet structure and position it better for future strategic growth.

Gilles Mettetal, the EBRD’s Director for Agribusiness, said: “KEA is an exceptionally well-managed company. We have had the chance to get to know the business since we provided the company with a US$ 35 million loan in 2009. This gave us the confidence to step up our engagement now and become a long-term strategic investor.”

Ruslan Moldabekov, Chairman of the Board of KEA, said: “We are proud of our partnership with the EBRD, which has already helped KazExportAstyk to diversify its production and become one of the biggest producers of oil crops in the CIS region. The EBRD equity investment into the holding heralds a new stage of our cooperation. We consider the EBRD’s participation in our company’s share capital as a token of trust not only in KEA but in Kazakh agriculture in general.”

The EBRD is spearheading an effort to increase productivity in the agricultural sector in the countries it invests in. Its Private Sector for Food Security Initiative, launched last November, brings together the Bank’s existing region of operations with the southern and eastern Mediterranean (SEMED). The huge potential for grain exports from Russia, Ukraine and Kazakhstan is complementary with the significant import needs of countries such as Egypt.

Since the beginning of its operations in Kazakhstan, the EBRD has invested around €4 billion in over 140 projects in various sectors of the Kazakh economy. Through its investments, it has mobilised additional investments in excess of €6 billion, with about 60 per cent of the projects being investments into the development of the country’s private sector.