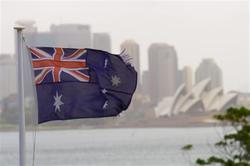 The Baker & McKenzie survey released today found 49 percent of Australian executives agreed that foreign ownership of agricultural land is a serious threat, with 26 percent disagreeing and 25 percent having no opinion.

Almost half of Australian executives surveyed by an international law firm favor higher trade barriers to protect the nation’s food supply and see foreign investment in agriculture as a threat.

“This data indicates a protectionist streak within the industry,” David Watson, co-head of Baker & McKenzie LLP’s (1111L) Food and Agribusiness group, said in a statement today.

Baker & McKenzie, an international firm with more than 3,800 lawyers, surveyed 162 executives from 11 sectors across Australia on the issue of food security, foreign investment in agriculture and concentration in food retailing. The results may bolster calls by the opposition Liberal-National coalition for tighter foreign ownership rules for agribusiness and rural land.

Australia produces enough food to feed its population of 22.8 million and exports surplus red meat, grain and oilseeds abroad to feed between 60 million and 80 million people, according to the Baker & McKenzie report.

In January, the Australian parliament released results of an inquiry into the acquisition of rural and agricultural land by foreign investors that affirmed the current policy.

The Baker & McKenzie survey released today found 49 percent of respondents agreed that foreign ownership of agricultural land is a serious threat, with 26 percent disagreeing and 25 percent having no opinion.

When asked if the Australian government should impose higher barriers to favor Australian commodities, 45 percent agreed, 36 percent disagreed and 19 percent had no opinion.

Rabobank, (RABO) a lender to farmers, said an increase in protectionism against foreign investment in the agribusiness sector could hurt asset prices and reduce food production, the Australian Financial Review reported today.

The newspaper cited Thos Gieskes, chief executive of Rabobank’s Australian and New Zealand unit, as saying the debate about foreign investment in the sector has been “twisted,” as protectionism would make the sector less efficient.

The Baker & McKenzie survey also found the majority of respondents favored more government intervention in retailing to reduce the effects of a duopoly in the sector, dominated by grocery retailers Woolworths Ltd. (WOW) and Coles, a unit of Wesfarmers Ltd. (WES)

“The introduction of a supermarket ombudsman, as proposed by the Australian Food and Grocery Council, is a possible solution,” Andrew Christopher, head of the law firm’s competition practice, said in a statement.